According to the Kazakhstan stock exchange (KASE), may the volume of deals of currency swap transactions increased to the APR quite considerably. The increase was 296,8 billion tenge, or 36.9 per cent. The total amount of transactions 1 trillion to 100.9 billion tenge.

All deals were concluded at US dollar. Previously, such a pronounced recovery in the currency swap transactions, normally preceded devaluation of tenge to dollar.

However, when calculations in the annual average yet here reigns the reverse trend. In January-may compared to the same period last year the volume of transactions declined by 55.8% to 6 trillion. 34,4 billion. In dollar terms – by 58.1 per cent to $15 billion 114.3 million

It is noteworthy that the highest activity on the swap market excelled over the last month of spring “Halyk Bank of Kazakhstan”, usually not appearing in such a role.

In the leading trio with him became a subsidiary of “Bank VTB Kazakhstan” and “Tengri Bank”, controlled by Indian investors.

The results for January-may go ahead interstate “Eurasian development Bank”, the key shareholder of which is Russia, and the Russian “daughter” of “Bank VTB” and “Alfa-Bank”.

Kazakhstan and the swap market serves as the last source of foreign exchange resources, and to parent banks

At the exchange spot foreign currencies market, KASE may ended lower. Compared to April turnover fell by 10.2% to 672,7 billion tenge. The main source of negativity was the dollar – trading volume it has decreased in may by 7.1% or $121,2 million to $1 billion 600,2 million

If compared with March, reaching its monthly high of 2020, the may momentum for the dollar fell 2.2 times.

The single European currency and here was no exception, as the trading volume in January-may decreased compared to the same period of 2019 by 47.9% to 14.7 million euros.

As follows from the calculations of investment analysts to invest in the Kazakhstan currency in may was beneficial, as it strengthened against all foreign currencies traded on KASE.

For example, the us dollar tenge grew by 3.1%, which, however, much lower than the dynamics of national currencies of some neighbouring countries. Thus, among the currencies of the CIS countries has mostly appreciated against the dollar in may, Kyrgyzstani som (7,2%) and Russian ruble (6%). 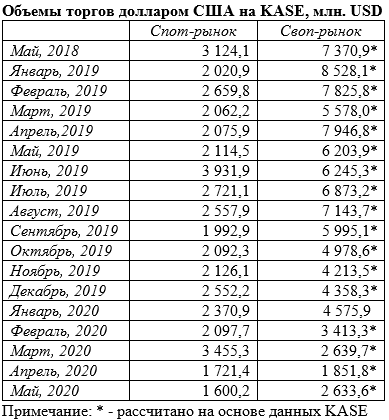