Anyway, the survey has given a surprise since they show a simultaneous decline in the share of respondents in all currencies referred to in the relevant question. So,

Apparently, this situation is caused by uncertainty with the exchange rate of tenge to dollar, which had virtually ceased to fluctuate, in contrast to its dynamics in 2018. It is also possible that Kazakhs are forced to reduce their savings under the pressure of rapidly rising prices for food, housing and rent for him.

In which currency You keep your cash savings?

The actual concealment of data on devaluation expectations looks strange against neighboring Russia,

a key partner of our country in the Eurasian economic Union, which very soon – by 2025 there will be a common financial market with a supranational regulator, based in Almaty. The Bank of Russia (the Central Bank), the order of which a survey of residents conducted by LLC “info”, information about their devaluation expectations still publishes. Data from the October survey shows that

the share of Russians waiting for the growth of the dollar against the ruble, fell in October to 43% from 46% in September

The Russians believe in the stability of the exchange rate

Those who believe in the stability of the exchange rate of the Russian currency to the dollar, became more – 30% versus 28% a month earlier. Became more and those who expect appreciation of the ruble, the share increased from 6% to 8%. By the way, in October, the Russian currency actually strengthened against the dollar with 64,64 rubles at the official rate to 63,87 rubles, or 1.2%. In Kazakhstan, on the contrary, the dollar rose for the second month of autumn level in 387,99 tenge to 388,54 tenge (0.1%). Much more rose we have the Russian currency – from $ 5.98 to 6.09 tenge tenge, or by 1.8%. 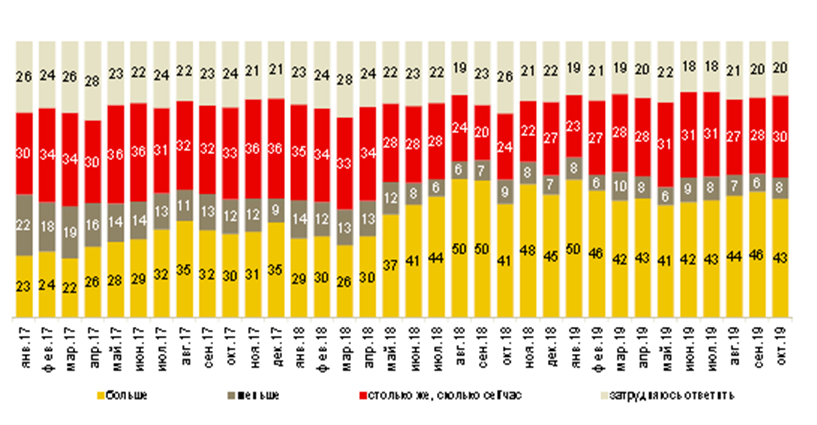 On inflation expectations of the Kazakhstanis, the situation has not changed much –

the majority of respondents still believes that the national Bank will not be able to keep inflation in the corridor of 4-6%.

Besides, in October the annual inflation rate actually rose to 5.5% from 5.3% in September. The share of those expecting growth of consumer prices by 1-5% in the next 12 months, down from 10% to 9%, and those expecting them to increase by 6-10%, there was 20% versus 25% the previous month. The share of respondents expecting inflation in the range of 11-15%, has not changed — they are still 15% and those who believe in the worst case scenario with prices rising by more than 20% — 12%. However, slightly decreased the proportion betting on the rise of prices in the range of 16-20%, from 19% to 18%. Thus,

65% of respondents expect inflation in the next 12 months is not below 6%.

On how much, in Your opinion, will increase prices for food, nonfood goods and services in the next 12 months?

In Russia, where the Central Bank to more effectively and consistently pursued a policy of inflation targeting in comparison with the Kazakhstan national Bank, in October, inflation continued to decline and dropped in October to 3.8% from 4.0% in September. No wonder, therefore, that in Russia the share of respondents expecting further declines in consumer prices in the next 12 months are very high, although it decreased to 56% from the September level of 57%. However, it became more and those who expect inflation to rise, the share rose from 17% to 19%. The deceleration of inflation also continues to expect 7% of respondents.

How, in Your opinion, in General, will change prices in the next 12 months? 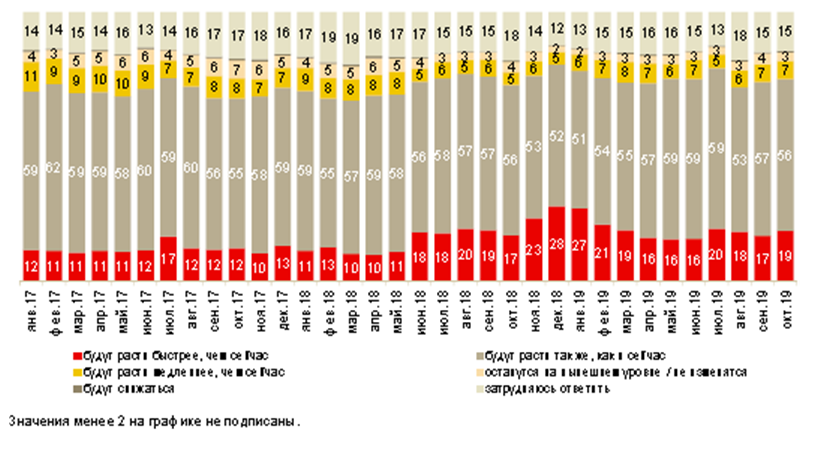