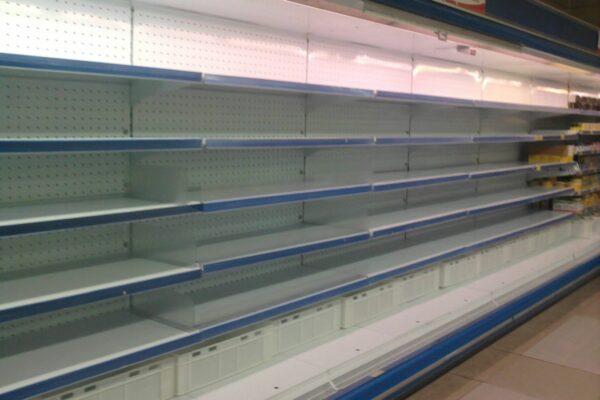 In Turkmenistan a serious spike in the prices of imported goods, including hygiene items. Portal Radio Azatlyk acquainted with the prices of the Ashgabat market “Altyn Asyr”.

The exchange rate on the black market when buying is 18.8 per 1 US dollar, the sale of 19 manats. The Central Bank rate to 3.5 manats for 1 dollar.

The sellers explain the high cost the fact that the goods imported. Specifically, the powder from Dubai. It’s the same with any other product.

— If you take the official rate, it turns out, Turkmenistan is the most expensive country in the world

On 4 November, the exchange rate of the dollar on the black market was 18.8 bn with the purchase, and sold for 19 bn.

Inflation on the background of the devaluation

However, annual salary rises by 10%, but prices are rising even earlier

And devalued the national currency.

— With today’s prices after the payment of gas, electricity and water from salary there is nothing left. Some products often have to buy in debt until next month — resident complained Mara.

From 1 January 2019, the salary of workers of state institutions and enterprises, pensions, state benefits and student scholarships were increased by 10%, and the minimum wage amounted to 790 AZN. The black market rate is $ 40, according to the official — 220. From 1 January 2020 minimum wage will amount to 870 manats.

400 tenge per dollar will not be experts

Meanwhile in Ashgabat, overnight vegetable oil has risen by half. 5 Nov if the state stores were selling it for 9 AZN per liter, on the morning of 6 November, it was worth 13. But the queue from this less steel, people lined up since 4 in the morning.

Privateers are still more expensive but no queues to buy food there can afford not everyone.

Risen significantly, though not overnight, cottonseed oil. In October, the price for 1 liter rose from 2.6 to 7.6 bn. The portal claims that this product is one of the most popular. And although it is low quality but relatively low price.

The deficit remains and other food — first of all bread, flour, butter, eggs and sugar

In some villages products are not imported for several months.

— The authorities of Turkmenistan, the presence of the food crisis is not officially recognized. The country’s media do not cover the problem. Moreover, amid the protracted scarcity of the country’s leadership systematically claims about the plans for export of excess food, including abroad, — noted journalists.

In Ashgabat was forbidden to dry clothes in the yards

If you see clothes lines or other devices — eliminate without warning. Early was taboo to dry clothes on the balconies facing the road. Now began to cut and fit in the yards with the outside of the houses are seen.

And so everywhere. Residents don’t warn you of the action performed by the staff of the housing. Just forcibly remove, cut. There were cases when in the absence of the owners cut together with linen — reported from the Turkmen capital.

Residents began drying things or on the folding units on the street, or even in the stairwell. Some (though very few) still dare to use the forbidden technique… but at night.

The strangest laws in the world

In previous times, on the eve of the Asian games 2007, the residents of Ashgabat are faced with a massive elimination of clotheslines. Then, together with dryers from the facades was removed and the canopies, and shutters from the sun.

The city authorities do not explain reasons.

— Staff post clothesline, refer to the order management with the aim of improvement of the city, writes Azatlyk.

The money is there, but not to take them

In ATMs of Turkmenistan, again no cash.

— In Mara’s pension and disability benefit has already been transferred to the card, but the ATMs are empty of cash no. ATMs in the district no money at all. Pensioners are forced to get around the city passed out of the city.

In front of ATMs in Mary are on duty police officers

No go in other regions of Turkmenistan.

— Difficulties faced by pensioners residing in villages Gyzyletrek, Tlekhuray, Kazanarak and Gulchak, words cannot describe. Due to the lack of money in local ATMs, they are forced to get to the town of Kerki or Turkmenabat, — informs a portal.

In banks, the lack of money in ATM explain the cotton-picking season and the payment of earnings to the farmers.

But those, according to the portal, they say that on their account the money was received

Where cash is still available, there are other problems. The daily withdrawal limit is 800 manat. However, to remove simultaneously the same amount is impossible ATM machines give out only small bills. People have to repeat the operation for 6-8 times.

In August 2019, the Turkmen leadership has recognized the problem of no money in ATMs. The head of state laid the responsibility on the officials. The specific cause of the shortage was not called.

Local authorities with the queues at ATMs are struggling in their own way.

In Lebap people in queues, delays and questioned by the police

In addition, enterprises with employees conduct interviews, demanding “not to appear” at ATMs.