These are the results of monitoring conducted by the analysts of the national Bank in the 4th quarter 2019. Participation in the survey took 3 266 enterprises in the real sector of the economy. More than 70% of them work with foreign partners.

Preference Russian currency gave 53,3% of the respondents, whereas the U.S. dollar – 45%. The share of the Euro and the yuan remains low, considering that the EU and China are key trade partners of Kazakhstan.

The dollar as a medium of exchange is dominant only in mining industry, whereas in other sectors the leader of the Russian ruble

On the use of tenge in the calculations stated 14,2% of enterprises.

The exchange rate of the national currency by the end of 2019 relatively stabilized. As a result, respondents noted the reduction of the negative influence of this factor on economic activity.

The share of enterprises that experienced the impact of changes in exchange rate of tenge to the dollar, fell to 29.6% against the Euro to 18.6%, the Russian ruble – to 32.0%. The smallest negative effect in the 4th quarter experienced mining industry enterprises and the largest manufacturing, transportation and warehousing.

Business is not satisfied with the terms of the loans

The possibility of lending participants of the survey evaluated as negative. And this applies to both price and non-price parameters. We are talking about the level of interest rates, additional kamisiyah, sizes, terms and requirements of the borrower.

In the national Bank emphasize that the number of enterprises, marking the deteriorated condition gradually decreases. So, improving Bank credit conditions observed for the enterprises of mining and manufacturing industries, as well as for transport and storage. 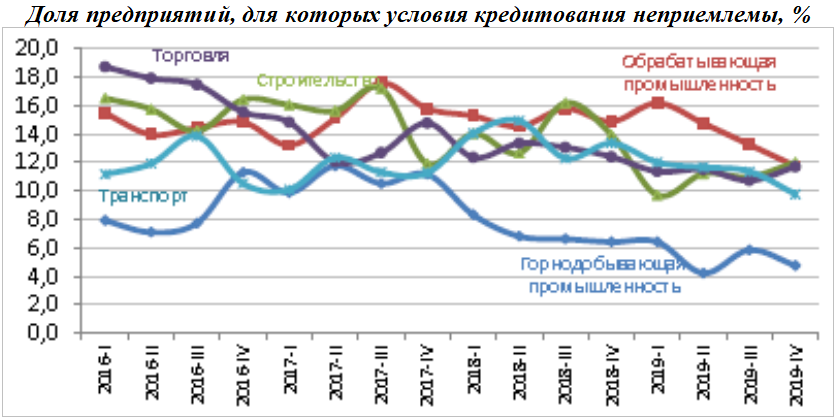 The highest interest rate on tenge-denominated loans recorded in the mining and construction industries. For currency and construction. Average interest rates on loans obtained by participants in the monitoring have slightly decreased, amounting to 12.3% (KZT) and 5.9% (in foreign currency). While acceptable was called to 6.4% and 2.9%, respectively. 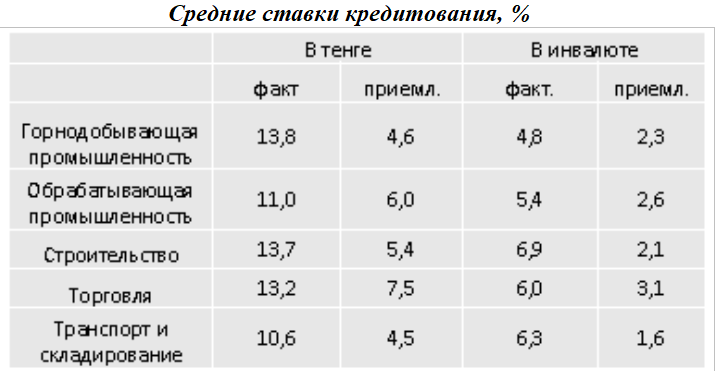