management Survey of banks on lending is a national Bank once a quarter.

Also in 2018, banks share information on the number of received and approved applications. The total number includes those applications that accepted credit decision (approved or denied), and those that were under consideration.

Demand is growing, but do not give all

Thus, it is easy to calculate that the total number of approved loans by the end of July-September amounted to 2.86 million And that’s about 31.8 thousand every day. Another 34,7 thousand applications come failures.

While loans are becoming more attractive: interest rates are declining amid growing competition (it concerns not only car loan, the terms of which do not change).

“In consumer lending, the competition is shifted to the plane of the facilities procedures for consideration of applications and communications with potential borrowers,” — noted in the national Bank.

Increased competition also resulted in activation of marketing promotions and advertising campaigns. More than a quarter of respondents said that advertising has led to increased demand for loans. The important role played by the state program.

“As before, offer of a mortgage is formed at the expense of government programs to support housing construction “Baspana Hit” and “7-20-25″. Banks noted the lack of housing space corresponding to the terms of the programs. According to them, demand grew due to lower interest rates and commissions, improved prospects in the real estate market, confidence in borrowers ‘ ability to service debt. In the next quarter, banks expect easing other terms of the mortgage,” — noted in the national Bank.

A growing number of people willing to take other types of loans. So,

One of the reasons was the decline in interest rates, which also contributed to the high level of competition.

“In this segment, banks have eased requirements on the credit limit and the creditworthiness of the borrowers that is alarming, and the commissions and fees for the service”, — notes the regulator.

It adds that the introduction of new regulatory requirements to the borrower’s credit will slow lending.

Some banks noted an increase in customer interest in credit card and hire purchase and is ready to offer them. In General, respondents expected to maintain its current growth in demand for all types of retail lending.

As follows from the results of the survey, banks in the third quarter to cut rates on loans to large businesses. The reason for the competition and the struggle for quality borrowers. In this case the STB, giving the business special offers, in return, nothing new is required – requirements for the creditworthiness of borrowers has not changed.

Improved conditions led to the fact that a business as large and medium, became more likely to take short-term loans. The greatest influence on it has the need to Finance working capital.

While demand from small businesses remains low. But soon the situation may change:

“Banks are increasingly involved in the development of SME lending. In this niche are planning to enter traditionally retail banks. In turn, corporate simplify the process of granting loans. Development of new scoring models. Also run specialised products for young entrepreneurs, startups, car loans and unsecured lending for individual entrepreneurs”, — noted in the national Bank. 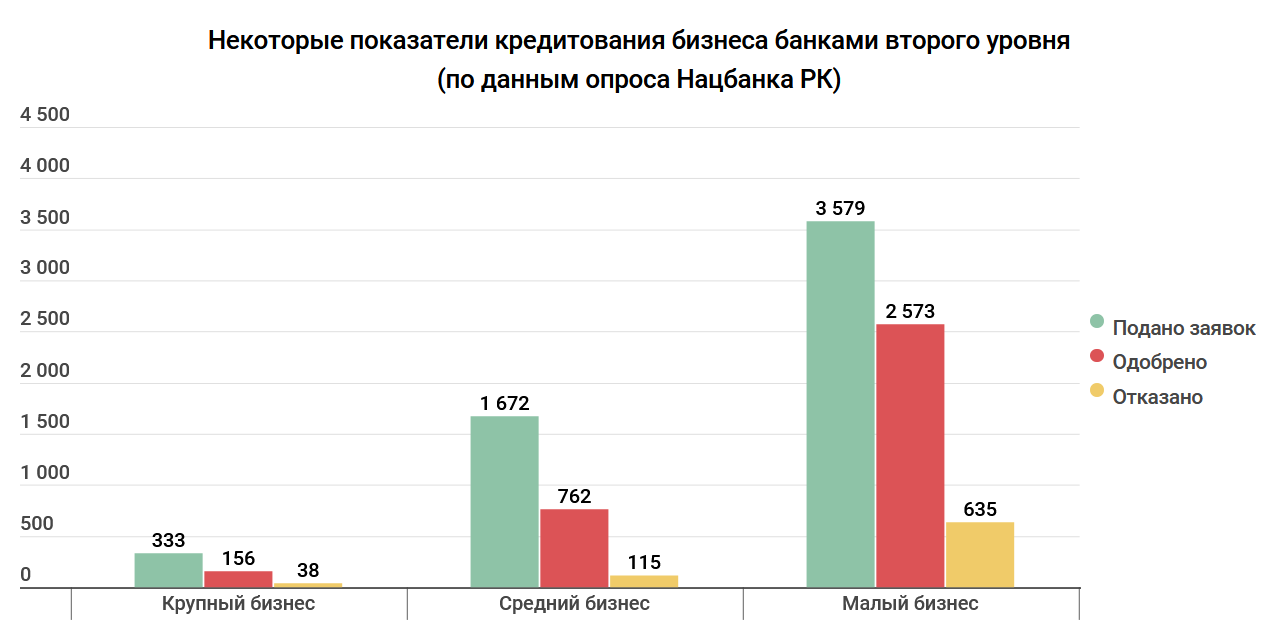 Long-term loans are mainly represented by government programs, but the conditions of these programmes and hinder its development.

“So, the banks-participants of the program “Economics of simple things” note the presence of a large number of borrowers interested in financing working capital. Also note the lack of demand for credit for investment in fixed assets. At the same time, the presence of such a demand, banks noted, not included in the program”, — notes the regulator.

According to the forecast of banks in the next quarter the demand for credit will continue to grow slowly. Thus any change in the loan terms and requirements to borrowers they don’t plan.