The cost per square meter in the regional center increased by nearly 10%, with an average growth in the country is 0.4%.

In September, price growth for new homes was celebrated in 5 cities, but stand Kostanay. According to official data, the cost per square meter of new housing for the month increased by here is 9.2%. However, annual growth has exceeded 20%. For 12 months the cost per square meter increased by 39.5 thousand tenge. However new construction in Kostanaj becoming more expensive faster than in any other city in the country. Interestingly, in second place on this indicator is Families (32,4 thousand), the third – Pavlodar (+31.4 per thousand).

The national average increase in the September for apartments in new buildings amounted to 0.4%. This is relatively little, but new housing is growing in value for 14 month in a row. If you look at the change in the value of new buildings in the last 12 months, only in Ust-Kamenogorsk new housing was somewhat cheaper. 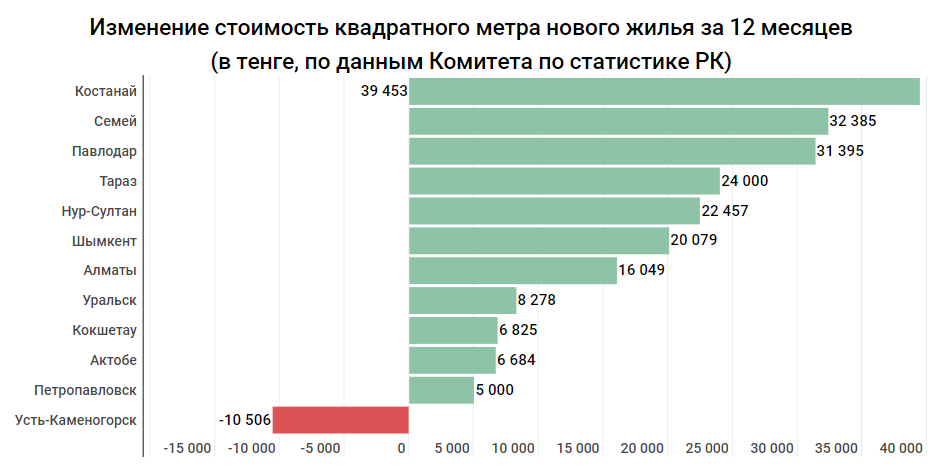 In Almaty all traditionally

According to official data, the cost per square meter in new buildings South of the metropolis in September rose 0.9%. The current average price – 342 thousand tenge per square meter. Given recent trends, this is not the limit – for the last 6 months of new buildings in Almaty are getting more expensive for the fourth time.

In the secondary market of the metropolis, the picture is more familiar. The apartment is unceasing increase in cost is 11 months old. In September – on the same 0.9 percent. The current price of the square of the secondary – 365 thousand tenge. More real estate in Kazakhstan.

Amid the General growth of real estate prices in Almaty increased the value of its lease. The event is not the most common – according to official figures the last time this happened in August 2018. The September increase was quite large – 3%.

The capital under control

Nur-Sultan prices are generally not changed. And the cost of housing, and its rent remained at the level of August. This, incidentally, is quite rare. New buildings in the capital has risen for the first time since Feb. The prices on the secondary market remained stable, after rising 2.3% in the previous month. Additionally, the cost of rental housing in Nur-Sultan, according to official statistics, last changed in February. Then the rent increased to 2784 tenge per square meter. And still this is the highest rate among all cities in the country.