According to the National Bank in October 2019, the volume of remittances sent through money transfer systems (SDS) abroad amounted to 66.6 billion tenge.

Back flows are much more modest, 29.4 billion tenge. The difference – to 37.2 billion tenge, and it is a record.

Never before have the people of Kazakhstan is not sent through SDP, as in October 2019. It is already 4 months in a row, the volume of deliveries exceeds 60 billion tenge. Earlier this limit was taken only once: in October 2018 — 61,6 billion.

There is significant diversification of the translation. Increased the amount of sent funds:

The growth of remittances to Central Asian countries and Turkey helped to offset the drop in the direction of China (for the year by 17% to 29.7 billion in 10 months) and Russia (10.4% to 171,5 billion tenge).

From Russia money will not be

Falls the share of Russia in the volume of remittances in Kazakhstan. In July 2017 from Russia came 65.5% of all transfers in October 2019 and 33.7%. This occurs against the backdrop of a sharp decline of funds received:

• In 2017, on average, every month from Russia to Kazakhstan through the PSD went 14.4 billion tenge;

In General, for 10 months of current year from Russia to Kazakhstan sent 122,3 billion tenge a year earlier over the same period was 149,3 billion. However, the decrease is primarily due to the restrictions imposed by the CB.

The aim of this measure is the fight against the shadow trade. 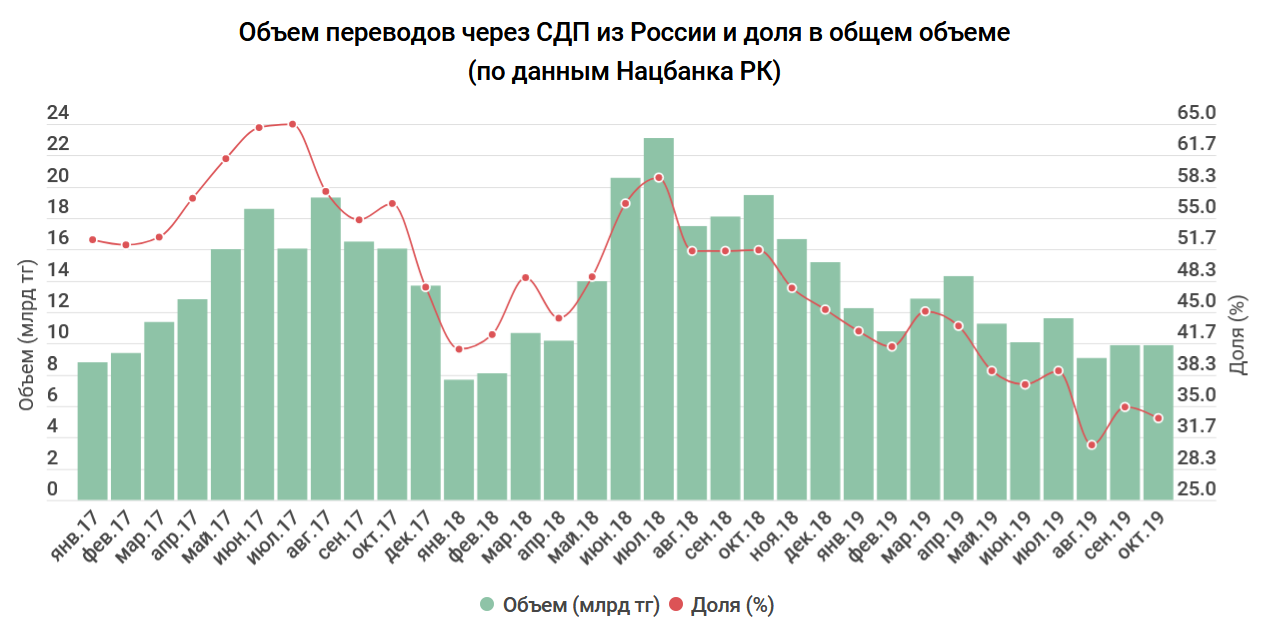 On the other hand, all Kazakhstanis will receive:

However, even aggregate growth of transfers from of these countries did not cover the decline in revenues from Russia.