Opened up the wall (actually opened the curtain between the two parts of the same premises), and people began to move to the side of the hall near the stage under enthralling music, flying between red, black spheres that were projected on the walls.

So on Thursday, November 28, in Almaty in sports Palace started the presentation of new products and services Chapter Kaspi.kz Mikhail Lomtadze, who took to the stage in a constant red sneakers. From cash to Bank transfer

First the head Kaspi.kz Mikhail Lomtadze said that the company’s products play a key role in the transformation of the cash economy is non-cash.

For example, in September of 2016 were held in the country of 9 million card transactions. In September 2019, there were already 107 million, or 12 times more than in 2016. This dynamic is associated with the appearance in 2016-2017 Kaspi Gold card (currently this card are 4,5 million people) and mobile apps Kaspi.kz.

“At the heart of our innovation mobile app Kaspi.kz — said Mikhail Lomtadze. — With a single app you can make payments, transfers, manage personal finances and to obtain bonuses. At the moment the app has 6 million users. It is every third inhabitant of the country.” Then one of those present laughingly asked, “so What do the other two?” This issue he certainly not heard. But the presentation showed that the “other two” will also be able to find the right products and services from Kaspi.kz

When the team Kaspi.kz developed Kaspi Gold, the idea was that of a personalized card customers can not receive in 15 days (standard for the time the production time of payment cards), and 15 minutes at any branch Kaspi.kz. This goal the team has achieved: a lot of customers told us that the Parking they had to spend more time than obtaining the card. However, this Kaspi.kz did not stop, on the contrary, decided to “press the gas”.

Our team has created a completely unique service when a registered card Kaspi Gold is produced before your eyes in just 60 seconds. The design of the device and the customer experience made by the team Kaspi.kz and the device itself is assembled in Kazakhstan. We call this device with love — Kaspi Certomat, — told Mikhail Lomtadze and effectively pulled the cloth from the object on the stage.

This object turned out to be the most unique device for the production of a personalized card Kaspi Gold in real time. On stage, in front of hundreds of spectators Michael through the app Kaspi.kz ordered a personalized card. His identity, he confirmed with the help of a partner ID. 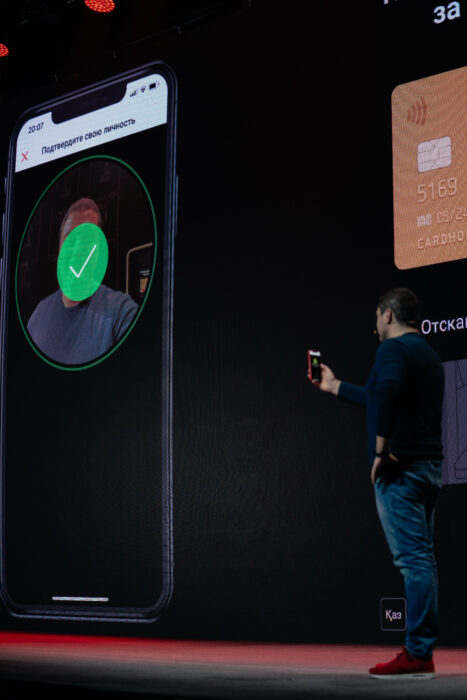 Is a unique facial recognition technology from Kaspi.kz. With the help of a partner ID you can quickly and easily confirm your identity directly from the mobile app Kaspi.kz and thereby reliably protect your finances, explained Lomtadze.

Here, on the stage, he walked up to the Kaspi Cartonato using a QR on your smartphone, ordered in cartonata the map and started the stopwatch. Stopwatch brought to the huge screen, and everyone began to wait, manages certomat in 60 seconds? The pause lasted only 47 seconds – so much needed apparatus for the manufacture of a personalized card for Mikhail Lomtadze. This service Kaspi.kz will launch in February 2020

Purchase without a map

Chapter Kaspi.kz also spoke about new possibilities of making payments via POS Kaspi. These terminals not only accept Red Kaspi Kaspi Gold and visa and mastercard any Bank, they also accept payment through QR Kaspi.

— This technology is fully integrated with the app Kaspi.kz. The seller simply enter the amount directly in Kaspi POS and the buyer Kaspi scan with QR app Kaspi.kz. Using QR Kaspi you can pay for purchases with a mobile app Kaspi.kz no cards, — said Mikhail Lomtadze.

Today, the entrepreneur per transaction using POS gives Kaspi 2.3 percent. However, according to Mikhail, so the company believes that Kaspi QR will be moving on cashless payments in the country that purchases through QR Kaspi Kaspi with Gold reduces the Commission to 1.69%. From December 2019 to pay Kaspi Gold will be without the card Kaspi QR.

Business loans up to 1 billion tenge

We also thought that you can do to help our favorite partners to actively develop the business? And we start up the Business Loan, — told about another novelty Mikhail Lomtadze. — Our partners will be able to amount to 1 billion tenge. Without collateral, for 6 months. Overpayment only 8.9% for 6 months. No other fees. So you took 100 tenge, and back – 108,9 tenge. And the most important is early repayment at any time without penalties and commissions.

What amount can expect partner Kaspi.kz? The formula is simple – 20% of sales from Kaspi in the last 6 months. — You just have to come to the office and sign the documents. More you walk will not need and will be able to do everything online in the mobile app Business Kaspi — assured Lomtadze. — After signing the paperwork you get the loan approval, the money is instantly credited to your account, and you can develop your business, replenish working capital, to buy goods and to Finance their costs.

Through the app Kaspi Business at any given time, you can learn all the important details simply and clearly the loan amount, the total overpayment, repayment schedule and more.

And at the end of the presentation of the product Business Loan, Chapter Kaspi.kz said

“Some believe that the country’s SMEs in some troubled borrowers. In Kaspi.kz it categorically do not believe this are proof 9000 partners Kaspi.kz. All grow, thrive, create jobs and make your customers happy. That is funding their partners, most of which are small and medium businesses Kaspi.kz plans to accelerate their growth and to make a joint contribution to the country’s development and economy”. Business Credit Kaspi.kz will be issued from January 2020. 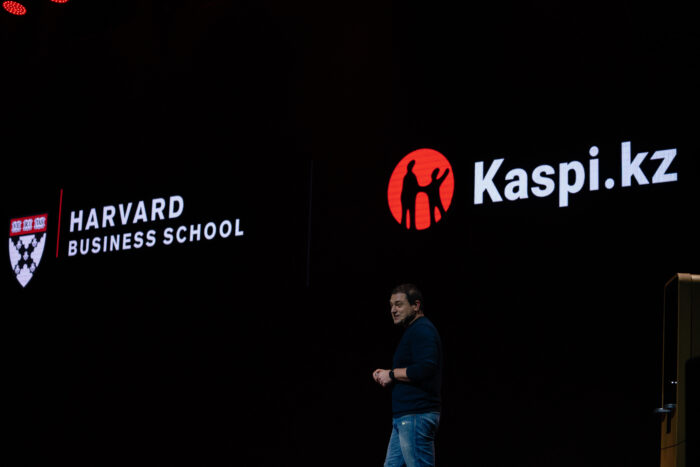 On 21 November we went to Harvard business school, and we had the opportunity to tell about Kazakhstan, about Kaspi.kz on two lessons in which students studied the case Kaspi.kz. We received a lot of enthusiastic feedback from the students, — said Mikhail. — 180 Harvard students who have studied this case, now know a lot more about Kazakhstan, they know that there is an innovative company Kaspi.kz. Until that case no one didn’t know a lot about Kazakhstan and about Kaspi.kz. We acted on behalf of our clients, our team and proudly told about our country and our achievements.

The screen brought the picture surrounded by Harvard students are Mikhail Lomtadze and the team of Kaspi.kz. In the end of the trip we made a picture of our team in memory of this emotional and momentous day, commented the Michael. But you can’t see that’s what…

…photo “prostrelil” down and on the screen appeared the feet of those who captured in pictures. Lomtadze recognizable by the already famous red sneakers.