In 2019, the national Bank together with external managers earned on the investment of the Fund’s assets of about 1.6 trillion tenge — $4,3 billion However, according to the Ministry of Finance, which keeps records of the funds in tenge equivalent, in April, the increase was only 0.05%, up to 26 trillion 369,6 billion tenge in absolute terms – by 14.1 bn.

The pandemic has resulted in the growth of spending

The reason for such a modest gain is known, the sharp increase in spending from the Fund on the guaranteed transfer in the Republican budget for emergency support to the population and business in the conditions of a state of emergency due to the pandemic.

In April, the transfer volume increased 1.6 — fold to 1 trillion 885,0 billion tenge (706 billion). Then in March, when it was introduced a state of emergency, — 40.7%, in absolute terms – by 341,2 billion tenge. Recall that to ensure anti-crisis measures and to cover the expected shortfall in budget revenue, it was decided to increase the guaranteed transfer from the national Fund worth 2.1 trillion tenge to 4.8 trillion.

When compared with data on the assets of the Fund at the beginning of this year (when it was almost 27 trillion 470 billion), their volume decreased by only 4%, and in absolute terms – by $ 1 trillion 100.4 billion tenge. Thus, losses of the Fund were not so great. Moreover, due to the March devaluation of tenge it will certainly be a substantial investment income in the first quarter foreign exchange gain on its foreign currency assets.

And even with low oil prices quite significantly increase the income of the Fund from its extractive companies. For April through direct taxes from these companies (with the exception enlisted in local budgets) has developed a growth in 1,6 times — to 775,8 billion tenge in absolute terms – by 291,0 billion.

Report on receipts and use of the National Fund of Kazakhstan for may 1, 2020

Note: *including investment income for the year 2019, according to the approved report of the National Bank of Kazakhstan for 2019 trust management by national Fund.

Predictions of the exhaustion of the national Fund too pessimistic

Coincide with the April dynamics data of the Ministry of Finance and calculations of analysts of the national Bank, the leading account of the Fund’s assets in its reference currency is United States dollars.

According to their calculations, total assets increased to a greater extent – by 1.9%, to $58 billion 541 million in absolute terms – by $1 billion 79,0 million As compared to the beginning of the year for the first four months also saw a decline of 5.2% ($2 billion 574 million).

So claims by some experts and deputies of the Majilis about the possibility of full depletion of the funds of the National Fund in the next 4-5 years still look too pessimistic. Even at low oil prices the acute need for oil, “potbelly” Kazakhstan can properly be supplemented by the devaluation of the tenge. Not to mention the tax revenues from the oil companies and investment income.

Assets of the National Fund of the RK, mln USD at end of period 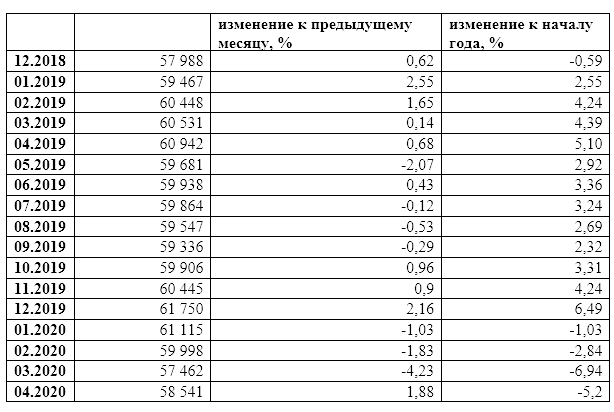 Source: the national Bank of Kazakhstan