According to stock market analysts, for the second month of autumn, the dollar rose to the weighted average of the 388,71 tenge.

Thus, for 10 months, the U.S. currency climbed 1.2 percent. Of course, this yields incomparable to tenge deposits, but when you consider that the rate on dollar deposits is 2%,

Demand for the dollar: there is no rush

Up to October, turnover in the dollar on the spot market declined for three consecutive months since July. In September fell to a monthly low this year in $1 billion 992,9 million

In October, the trend reversed, and the trading volume increased compared to the first month of autumn almost 5%.

excessive demand for dollars is clearly not the case

Besides, from the data of stockbrokers shows that in recent years the current October is minimal.

On the exchange market of currency swaps, where banks borrow dollars from the regulator and from each other, the decline in turnover continued for the second month in a row. In October volume of transactions here fell by 17% in absolute terms – by $1 billion 16.5 million

In principle, this is not surprising. Apparently,

For example, recently the national Bank reported a sharp deterioration of the current account deficit of the balance of payments of Kazakhstan amounted to $4.7 billion in the 3rd quarter of this year compared to a surplus of $0.2 billion last year for the same period. The main source of this negativity was

the decline in the positive foreign trade balance of Kazakhstan by 21.6% to us $14.5 billion

However, as can be seen from the above data, the rate of tenge to the dollar such alarming news special had no influence. This only confirms speculation that the national Bank abandoned the policy of free floating exchange rate, partially interfering with the behavior of national currency. 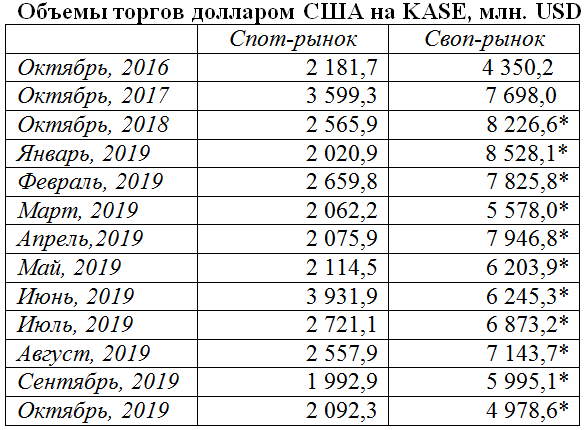