In January-April 2019 sale of 20 major export commodities (excluding oil) brought Kazakhstan more than 6 billion million dollars. A year later, the total volume of trade in these same commodities decreased almost by a quarter to 4.7 billion dollars. Moreover, the decline in exports observed in 18 out of 20 of these goods. For example:

Two exceptions are the flat rolled and iron ore and concentrates. In the case of rental growth of shipments to China. Only in April there were sold 51,5 thousand tons (more than 30% of the total monthly exports) to USD 19.9 million. This is more than in all of 2019.

The total export volume of flat products in January-April 2020 amounted to 281,5 million dollars, which is 4.5% more than indicators of year prescription. As for ores and concentrates has increased 5.3% to 197,5 million dollars.

However, there are products, which became important for export only in 2020. But many of them.

While 30.1 million dollars is the Netherlands, which, however, in April in Kazakhstan, the gasoline is not purchased. Instead, the shipment was in Mongolia, Kyrgyzstan, Uzbekistan and Tajikistan.

Exports of artificial corundum for the year grew by 41.8% (to 90.9 million dollars), and it happened due to the changing market. If in January-April of 2019, more than 80% of sales came from Russia, but now its share is less than 33% — about the same as Tajikistan and less than China. 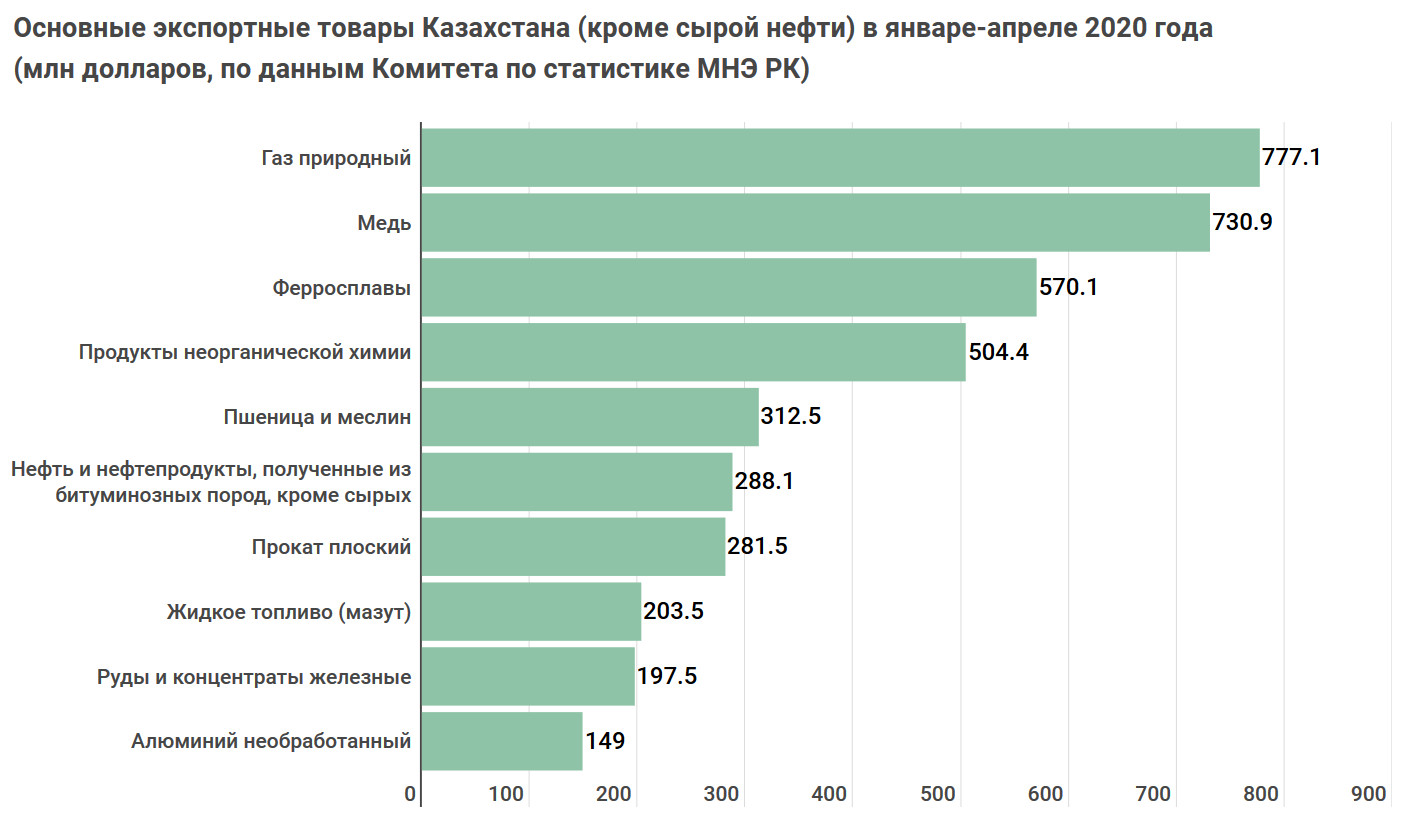 But the main product that gives Kazakhstan exports are to fall, is oil. In January-April 2019 total volume of Kazakhstan’s exports amounted to 18.5 billion dollars, of which the principal goods accounted for about 10.5 billion – that is, the oil provided for 56.7% of exports.

A year later the share is already more than 63% —

But also here has not done without changes in the markets:

But that growth had to sacrifice some other areas. For example, completely stopped the sale to Jordan, Malaysia, and Portugal (in January and April 2019, in total, brought 411,9 million), has virtually stopped in Sweden and Singapore (minus 126, 7 million dollars), greatly decreased in France, Israel, Switzerland, Korea and Spain (collectively – minus almost $ 1.5 billion). 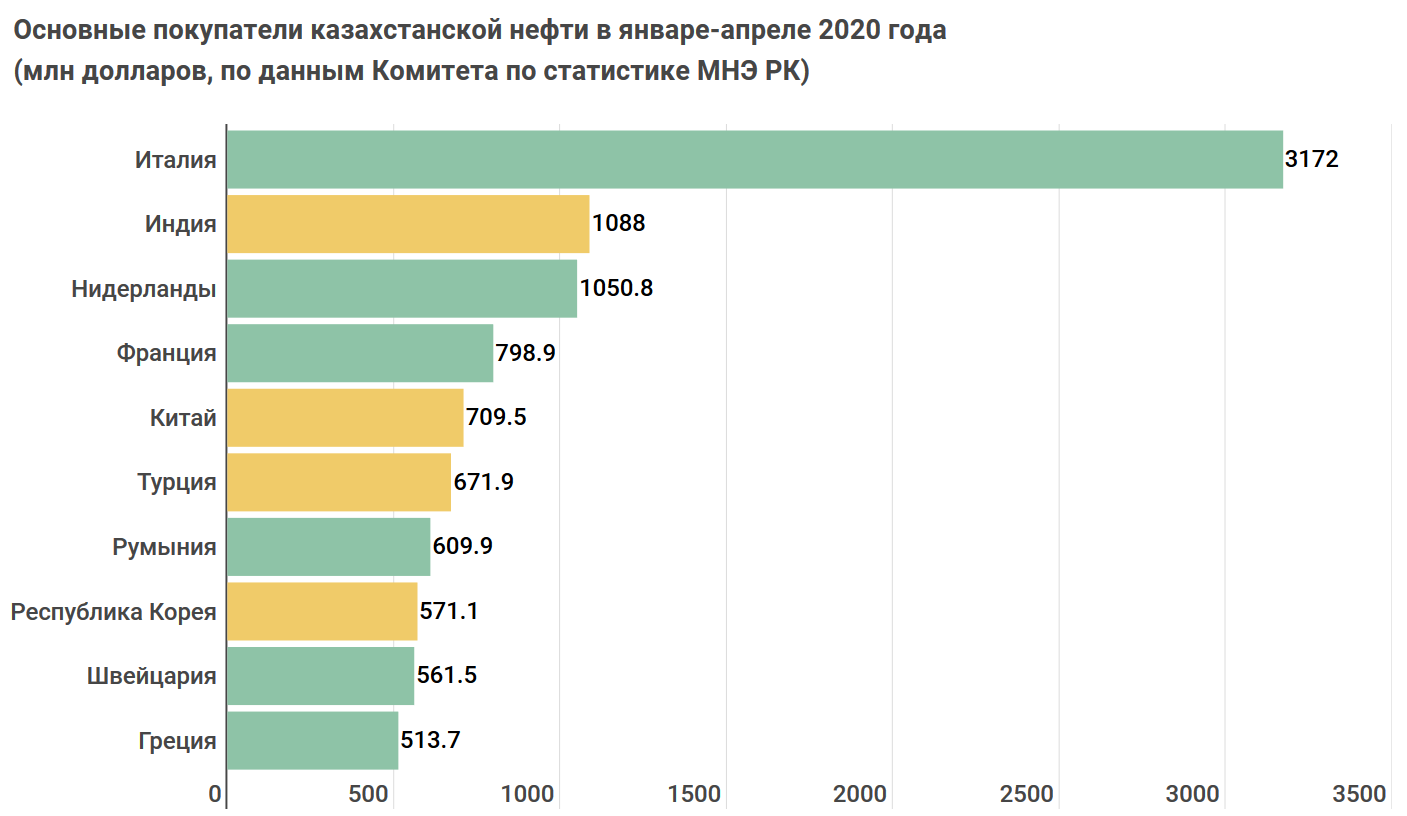 As for imports, the total volume of transactions for the 4 months amounted to 9.8 billion dollars – this is 5% less than the previous year. It drew attention to the decline in volumes of imported vehicles: 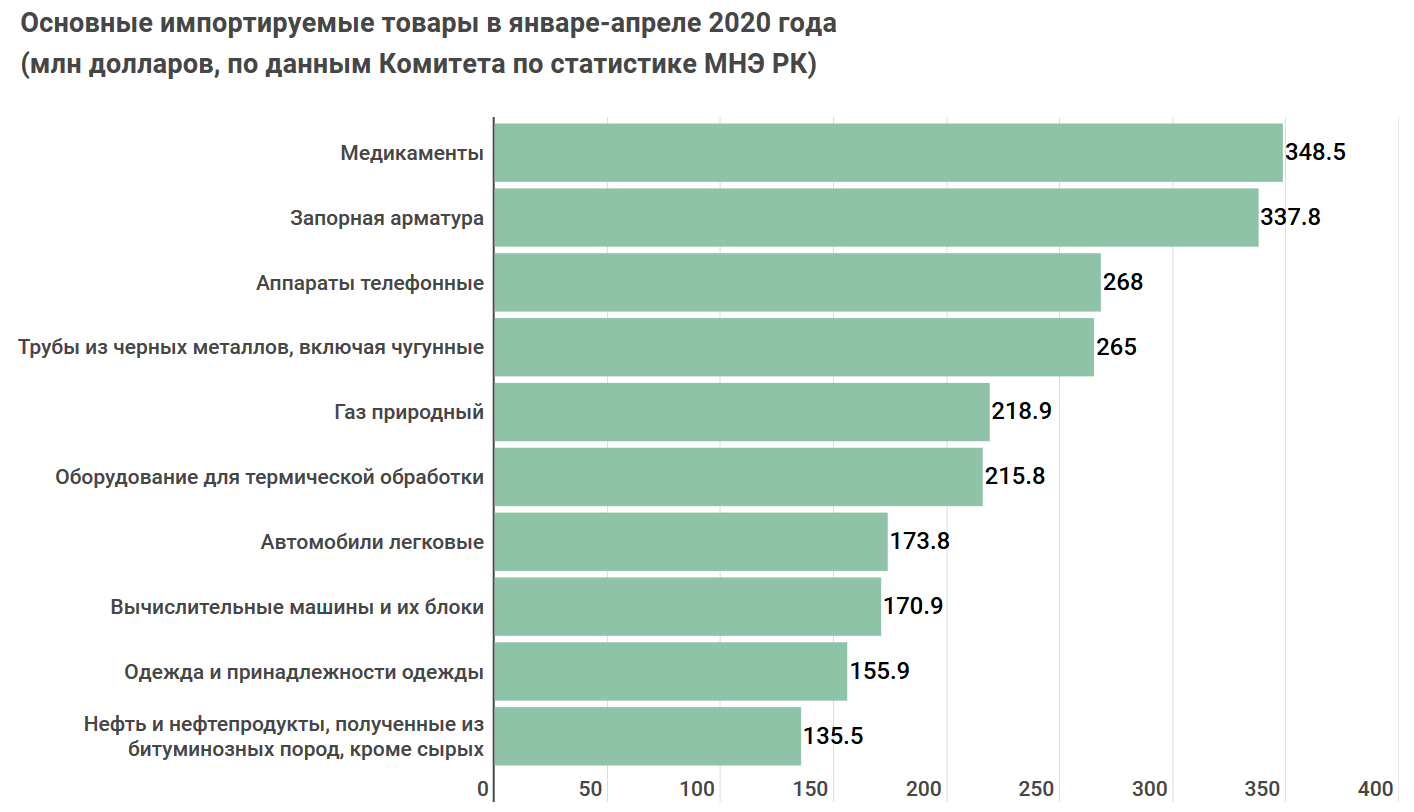 But increased imports of industrial equipment. First of all – valves. Procurement of taps, valves and other similar products increased 2.1 times and amounted to 337,8 million dollars. This is only slightly less than the volume of import of medicines.

4.4 times increased imports of equipment for the heat treatment of materials (up to 215.8 m) and the total value imported into the Republic of the air pumps was doubled (up to 96,6 million dollars).