Annual inflation in the neighboring country in January fell from 3 to 2.4%, which exceeded the forecasted estimates of rate of deceleration. This

level puts Russia in a row with the developed countries of the world. For example, in the US the December annual inflation happened at around 2.3%

In response to the significant impact of news factors on the growth dynamics of consumer prices, the Central Bank of Russia, on 7 February, has again lowered its key rate to 6% per annum. We will remind that earlier, on 13 December, it was reduced also by 25 basis points to 6.25%.

From the data of Rosstat, it follows that in January 2019, the inflation in Russia in annual terms was at the level of 5.0%. Thus, the success of the Central Bank in implementing inflation-targeting policy is quite obvious. Thus the price dynamics slowed down considerably in all components of inflation:

Inflation in the Russian Federation in January 2020, %

And how at us?

As can be seen from data statisticians, driver of inflation acceleration were food products. During the year they rose by 9.2%, whereas in January 2019 – 5.8%. This growth has failed to mitigate the slowdown of annual inflation on non-food goods and services. Coupled to these positions during the year it decreased by 3.2%.

The reaction of the national Bank on the acceleration of inflation was apathetic. So, at the Board meeting

On 4 February it was decided once again to leave its key rate unchanged at 9.25%

Recall that at this level it is held in September 2019. Thus, annual inflation declined in September, increased in October, then fell again and remained at the level of 5.4% to the end of the year.

For comparison, by early September, 2019 the key rate of Russian Central Bank were at the level of 7.25%. At the end of October it dropped to 6.5%, then in December to 6.25%, and finally to 6%. As can be seen, unlike the national Bank , the reaction of the Central Bank to change inflation was quite aggressive. Therefore, we can assume that our regulator in fact was eliminated from the targeting of this indicator. 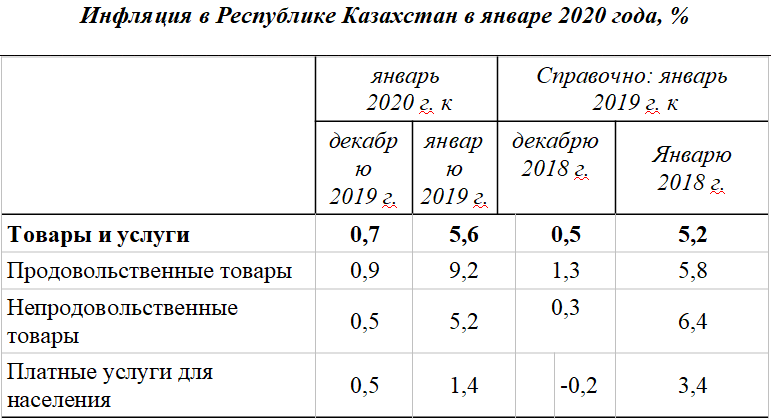 What does it mean?

Because of the illogical behavior of the national Bank and the rise of inflation in Kazakhstan has lost its former advantage over Russia in the price of money. The fact that the difference between the value of the base rate of the national Bank and the annual inflation in January fell to 3.65%. In Russia, on the contrary, the value of this indicator increased to 3.6% and in fact on par with Kazakhstan.

This means that in real terms, i.e. adjusted for inflation, to keep their savings in Russia was as profitable as in Kazakhstan. But at the same time in the neighboring country is much lower rates on loans and deposits. This is an advantage for Russian producers and banks with access to cheaper financial resources. In addition, lower consumer and mortgage loans for the population and the prices for the goods and services are rising slower than in Kazakhstan.