The international monetary Fund (IMF) for the third time this year lowered the growth forecast for the global economy. Under the threat of a collapse of 90% of the countries. At the presentation of the document “World economic Outlook” IMF chief economist Gita Gopinath noted that the global economic growth slowed to the weakest level since the financial crisis of 2008.

According to her, the main role was played by a sharper than expected slowdown in international trade. On investment and global production is strongly influenced by the trade war between the US and China. As a result of new growth forecast was 3% compared with July of 3.2%.

“According to our estimates, trade tensions between the US and China together will reduce global GDP by 0.8% by 2020”, — said Gopinath.

At the same time,

if it wasn’t mutual sanctioning tariffs imposed in 2018 and 2019, expectations of growth would be 4.2 percent

The IMF also revised the growth forecasts for leading economies.

Prepare for the worst

A week earlier the international Institute of Finance has released its calculations on the future of the global economy. Even more pessimistic forecasts of 2.6%. 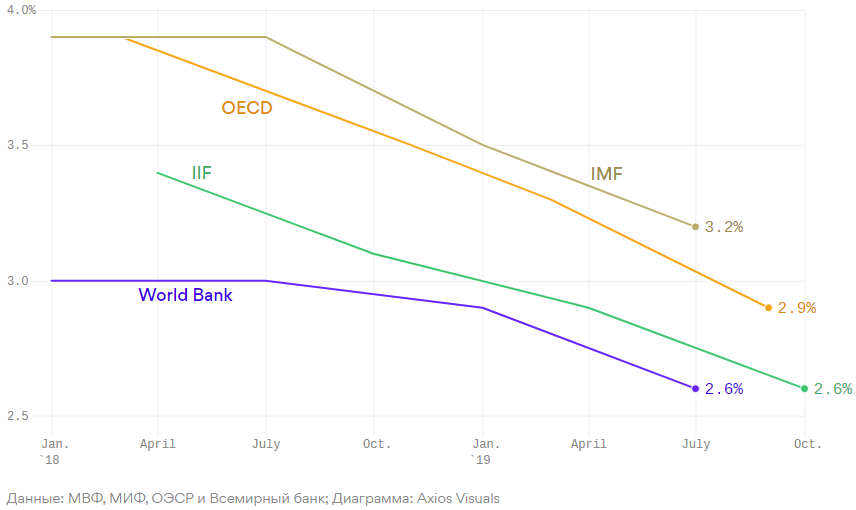 The analysts of the Institute also referred to a trade war. They said that this year economic growth will be the lowest in the last 10 years. They note that for more than a year, the global economy is in a state of “synchronized reduction”. And it already makes to consider the negative scenarios.

“It is possible that if governments do not take preventive measures, in 90% countries in the next year we will see economic collapse”

However, analysts are also positive. To avoid a new crisis pretty easily. You need not sacrifice economic issues for the sake of political interests. The revival of the world economy possible under the following conditions:

Only few expect that this will happen, and in the foreign press actively discussed quite radical ideas.

Money from the sky

Leading economists and financial authorities of the world declare their readiness to experiment with economic ideas. And those just a few years ago would be considered extreme or even ridiculous.

So, the ECB President Mario Draghi recently suggested that the Eurozone is to examine modern monetary theory, or MMT. Its essence lies in the fact that the country needs to spend money, regardless of inflation. This will support the economy. But when inflation reaches critical limits, the ECB will maintain interest rates.

A more radical idea for the so-called concept of “helicopter money”.

Essence — the Central Bank of any country can always increase the money supply, simply by printing bills and dropping them from the sky (like a helicopter) to suffering financial hunger economy.

to maintain consumer demand is offered to literally give people money, which in turn will stimulate production in the country

This will help to support the economy through the printing press, and not due to the growth of the national debt or the tax burden.

The concept was born back in 1969 and was considered hypothetical. But it is remembered in the early 2000’s, when the world’s economists debated how to get out of a deflationary trap of the Japanese economy.

Active supporters of “helicopter money” I think this is a safe way to revive the depressed economy and note that this is not so radical as it may seem, a departure from the existing norms of monetary policy.

However, despite the alluring simplicity of solving problems, there are pitfalls.

First, such a measure can only work in countries that are practically independent from imports. Otherwise, such approach would lead to hyperinflation.

Second, the “helicopter money” does not eliminate the political constraints, which, in the opinion of many, are the main obstacle of the current economic recovery.

It is also significant that creative ideas, which implies a completely new approach to monetary policy, promoting former heads of Central banks of different countries or those who are soon retiring.

The current financial authorities assure that everything is under control. They say that economic recovery is just a matter of time.