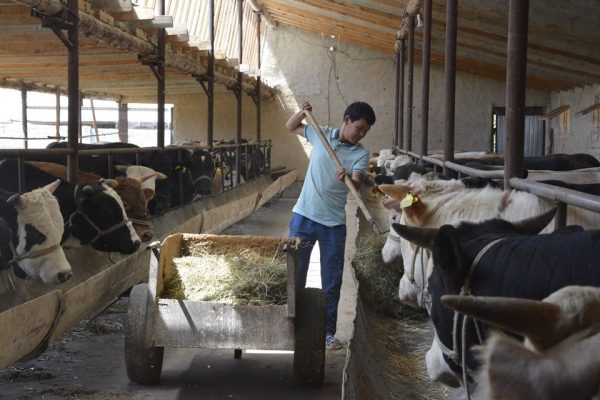 The village is another world. There are children in the winter I go in the school toilets on the street, there are no roads and a good salary

What emotions do young people have all this causes, but rejection?.. The reality is that

and there is no normal climate. There were only those soul who loves farming. There are basic things that will improve the situation in rural areas:

As a rule, in the village have 2-3 of the farmer and other residents work somewhere. And almost every home keeps the cattle or the farmer, or somewhere else. If they create the conditions and climate for enterprises in the cooperatives, they would significantly earn more. And for 5 extra liters of milk distributed to relatives and neighbors, and sold.

The reverse side of tales about life in the village

Popular myth: subsistence farming allows the villagers to provide themselves, the particular problems they have. This bike easily smashing of Akgul Aidarbekova, the author of the portal Adyrna.kz:

— In the village one sheaf of alfalfa costs 400 tenge. At first glance it seems that little money. However, if you consider that 5 cows in winter you need 1000 sheaves, we have to pay 400 thousand tenge. Delivery is charged separately. For livestock also buy barley, wheat and bran. If a cow eats 5 bags of wheat of 50 kilograms, it is 18 500 tenge. For 5 cows we need to buy wheat on the 92 500 tenge.

Veterinarians, knowing that agriculture is the main source of income of the villagers, raise the prices of medicines and vaccinations

you need to put the animals every 2-3 months.

As a result, cattle people see more harm than good

Some believe that the cattle gives milk, can be sold! However, to sell these products in the village — bad job. The town of milk can disappear, and the benefits will be great. How to develop agriculture with the price of food? This is one reason why people are not engaged in agriculture.

What country has such a relationship to the village?

Hakimian of Arapov, Director of the Institute of world economy and international relations, produces statistics on countries of the EAEU. The share of agriculture in GDP is now approximately as follows:

Even in the EAEU domestic agriculture is far from the leading positions. The potential is there, but it still needs to be implemented.

However, the economist Sergey Smirnov has no claim even to these figures. He believes that many of the indicators are just too high.

— In reports, for example, argues that now is 3.5 million tons of vegetables. For reference: in the Kazakh SSR in 1991, they produced 1.5 million tons. Since then, however, disappeared and the collective and state farms. Where are and where do these extra 2 million tonnes if the market prevailing imported vegetables and fruit? — it asked a question.

To work to be profitable?

For example, for farmers with little available credit.

— A pledge they leave their land, which few people need, including banks. If credit is not given, the possibility to organize agricultural production no. Agriculture has its own characteristics: year on year is not necessary — there are as fruitful and barren. Therefore, a need for loans of a special kind, he Arapov.

Will we be able to break into the Chinese market?

How many years is the formula: “the need to feed China! Huge market will eat everything!”

Adil Kaukenov, Director of the Center for Chinese studies at the CHINA CENTER, totally agree with that, but… He acknowledged China “a bottomless market” for agricultural products, especially environmentally friendly. And says that for our products is fixed such image. His words were confirmed by Eduard Poletayev, head OF PF “World of Eurasia”, saying that in crop production , we have one of the lowest levels of chemicals.

do we understand the opportunities the Chinese market?

— says Kaukenov. In my opinion, not quite. However, with the development of programs of non-oil exports in recent times there had been some progress.

Although our expectations are sometimes too high, “as if China is just waiting, as if to buy all the meat”. In fact, the Chinese market for many foreign companies and competition is quite tough.

In the domestic market of Kazakhstan too little consumers

— In addition, when products are sent to the city, there is the question of pricing, to the village, the money comes in small amounts. Pelochkoy-to guy would be onthe opening of foreign markets, added Kaukenov.

Industrialization in the shortest possible time do not hold, and domestic agriculture has charge and potential. We need reform — which must begin with people.