eve already held the March devaluation of the tenge on the website of the national Bank published the results of a survey of the population only in January. It is held by the company GfK Kazakhstan by order of the Central Bank of Kazakhstan.

Since August 2019 were eliminated question about the expectations of compatriots at the exchange rate of the tenge to the dollar. So the focus falls on the results of the survey on currency preferences of Kazakhstani people, the storage savings.

It follows that then

If in December, 70% of respondents voted in favor of tenge-denominated savings, in January the figure was 74%.

The share of those who bet on the dollar, down from 34 to 24%. Note that the dollar in January fell slightly. Preferring the Russian ruble became more – their share increased from 6% to 7%. Euro expectations remained unchanged at 6%. Let us remind that in January it was already known about the outbreak of coronavirus in China, and the world price of oil is then gradually decreased.

In what currency do you keep your savings?

Waiting for the Russians?

A similar situation occurred in January in Russia, where a similar survey was commissioned by the Central Bank conducts OOO “infa”. The proportion expecting growth of the dollar against the ruble dropped there from December’s 41% to 38%. That is, to its lowest share since June 2018. Those who bet on the stability of the exchange rate of the Russian currency, was slightly lower than in December and 32%. But from 7 to 11% increase in the proportion who bet on the ruble strengthening. Meanwhile, in January, the Russian currency weakened against the dollar from 61,9 to 63 rubles.

On the dynamics of inflation, which in January rose up in Kazakhstan to 5.6% yoy, expectations were as follows.

Become more awaiting the growth of consumer prices in the next 12 months in the range of 1-5%. Their share increased from 7% to 13%. Recall that the target range for inflation for the year is defined by the national Bank of 4-6% per annum. At the same time significantly increased the share of respondents expecting inflation in the range of 6-10% (from 23% to 28%).

A bit more was those who suggested a price increase by 11-15% (from 15% to 16%). But the share of inveterate pessimists, suggesting a more significant acceleration of price movements decreased (from 21% in December to 16% in January).

On how much, in your opinion, will increase prices for food, nonfood goods and services in the next 12 months?

In Russia, where annual inflation in January dropped to 2.4% from December values of 3%, the proportion of Russians waiting for further declines in consumer prices for the third month in a row remains at the level of 58%. Those who believe that the price growth will accelerate, was 16% (in December, 18%). The deceleration of inflation rates expected in January, 7% of Russian respondents against 6% a month earlier.

How, in your opinion, in General, will change prices in the next 12 months? 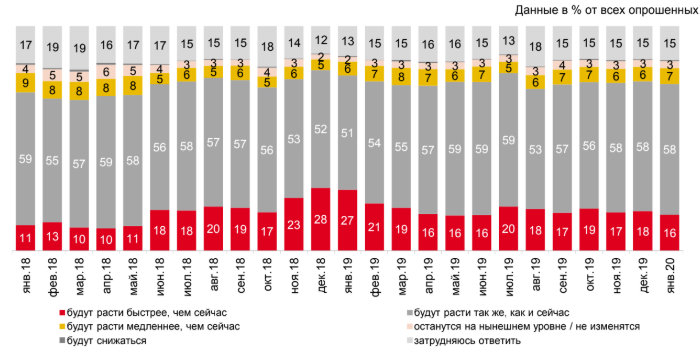