the intention to increase the export of non-oil products to China Bakhyt Sultanov said at a meeting with Vice mayor of Wuhan Xu Holeem. According to the Minister, Kazakhstan is ready to increase exports to China by 60 commodity items totaling $1.6 billion.

In particular it was about increasing the volume of existing export products of domestic industry and agricultural complex.

“Moreover, we propose to consider the possibility of imports from Kazakhstan more than 30 products that have not previously been supplied is aluminium oxide, Portland cement, ferrosilicon, metal pipes, ferroalloys, oxides and hydroxides of chromium, bearings, rods of steel and iron and other goods,” — said Sultanov.

However, according to some named Minister positions have doubts.

Metallurgy: and have something to sell?

Flat rental may have problems – its production in Kazakhstan for the first 9 months fell by more than a quarter. More than a third decreased the production of semi-finished products of alloy steel, and about 1% — of non-alloy. As for the bars of steel, the situation is not entirely unambiguous. Because the production of alloy steel increased by 42.9%, and alloy fell by 11.8%. In addition, exports for the first 8 months fell by 14.7%.

However, for the Kazakhstan ferrous metallurgy, the Chinese market can become an alternative to Russian. In January-August 2019 in Russia took 86% of total exports of bars (previous year – 60%) and 77% of flat rolled (67% for 8 months of 2018). So the diversification of the domestic manufacturers need in any case.

Not everything is clear and ferroalloys. For example, for 8 months Kazakhstan exported goods worth $1.3 billion, which is 9% lower than a year earlier. The main reason for the decline is the fall in world prices. While China is the main consumer of domestic products: $510,5 million (38.5% of total exports).

According to official data, during 9 months of 2019 Kazakhstan is sold to China 715,3 thousand tons of products of plant and animal origin. Here ready food products. The total amount of exports amounted to $225,3 million, And this despite the fact that in January-September 2018 the total volume of transactions was at $159,3 million Thus, the growth of exports exceeded 40%.

Most brought trade wheat ($62 million), but the volume of transactions fell in comparison with the same period of 2018. Then the exports amounted to $71.7 million

But the faster growing volume of trade in raw materials and waste in food production. So, $11.5 million brought the sales of oil cake from rape seeds. It is interesting that a year earlier the trade was carried out. The export of wheat waste was $9.4 versus $7.1 million in January-September 2018. 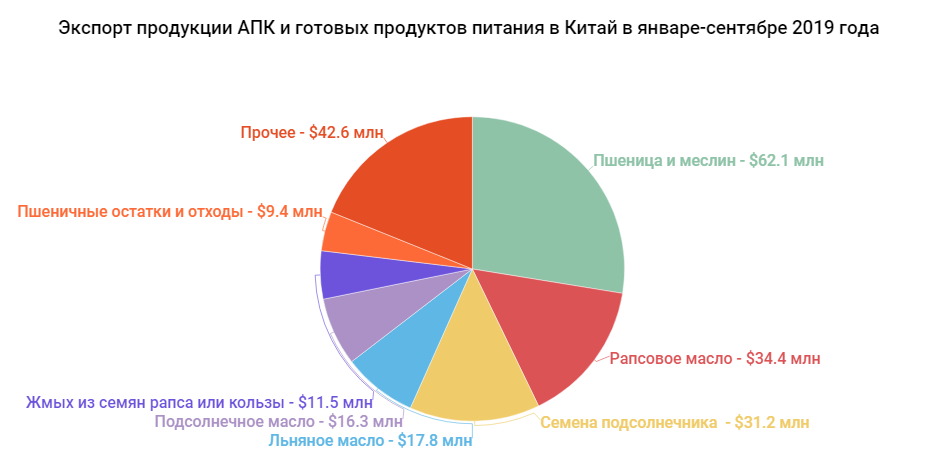 In the first 9 months of 2019, the trade turnover between Kazakhstan and China amounted to $10.4 billion. Moreover, the majority (5.9 billion) accounted for the export of Kazakh products. In comparison with January-September 2018 the volume of transactions increased by almost 26% ($2.1 billion). Export of Kazakhstan production rose by 38.6%, Chinese imports by 12.2%.

The basis of exports is the primary sector. So, sales of mineral products brought more than $3 billion in 9 months. The most popular:

More than us $2.1 billion brought metals and products from them: 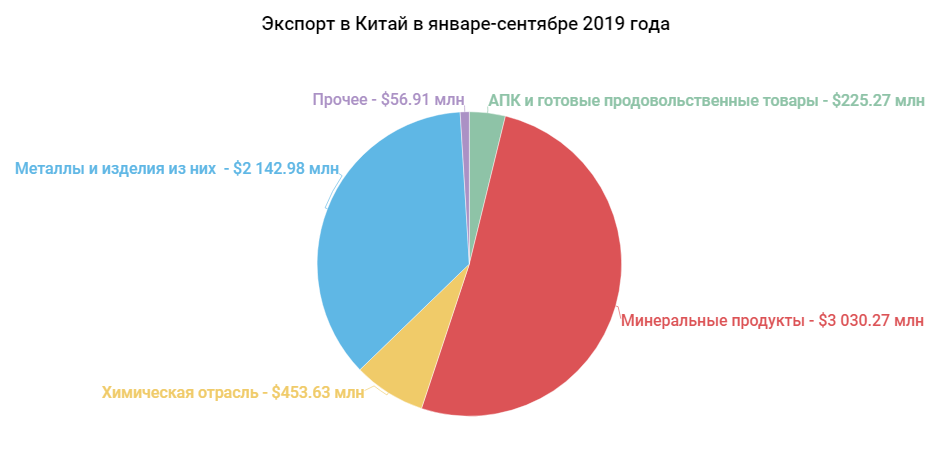 Imports from China are much more diversified: for the 9 months