This is no joke — the building is literally disassembled and taken to an unknown owner’s direction. The investigation for 5 months unsuccessfully looking for a home, although the names of the suspects are known. 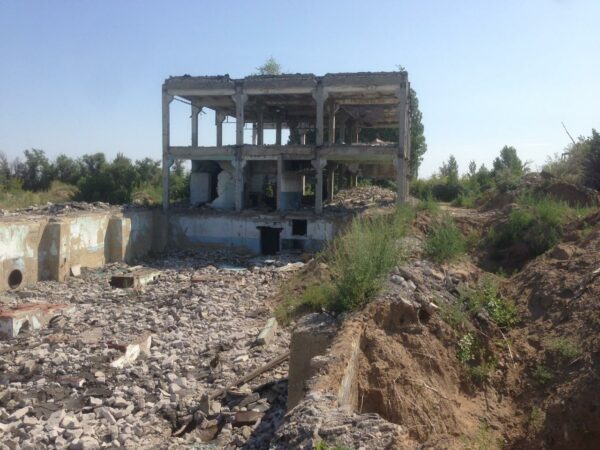 The remains of the building with an area of 2.2 thousand square meters

In 2014, businessman Sergey Michalev acquired gigantic building of the former pumping station of the former chemical plant at auction after the bankruptcy. And in 2018, the building disappeared.

The property was, but splyl

— I bought the building because it is inexpensive cost. He tried to sell it. He found a buyer. Gave me a down payment of 1.5 million tenge and disappeared, — says Sergey. — I have no agreements is not concluded, handed the original documents as a guarantee for the Deposit.

Come after 3 months on the plant, instead of pumping — pit. Nothing, everything was taken.

This is despite the fact that the factory just do not get. There is a dangerous trade, JSC “caustic”. First, we need to write a statement, only a couple of days to obtain the permit. While active there is a consequence, unidentified men continue to dismantle what is left of someone else’s property.

The businessman turned to the police. Told all the details: when and who offered him the deal of sale. Even gave the coordinates of the new structure, which from materials stolen vengeance is being built at the other end of Pavlodar.

No buildings — no matter

It took 5 months from the date of the registration statement, but… the Mysterious case of the theft of the building is not disclosed. We called the investigator of the Northern police Department of Pavlodar pack Altynshash Itybaeva. High, said by the investigator — that third parties, including us, to say anything will not. At the other end of Pavlodar of the stolen materials to build something big.

According to Sergei Michaleva, during the time the investigation was conducted as many as two confrontations with suspects. But never found who and who in the plant “caustic” gave permission for the demolition and removal of building materials. In the proceedings in the case had to intervene even regional Prosecutor’s office.

Actually, as it turned out, my building without my knowledge was resold to third parties. They took it apart. Just as it could happen, if no contract I never signed? And now, as I understand it,

the police tries to bring the case in civil law relations. But it won’t work — an oral agreement to business will not sew

Of course, I complained to the Prosecutor’s office. As the investigation goes on, and the building of my stolen building materials continues to grow, — says Sergey. — Last week, the 9th of August, I again some how got on the territory of the plant. And there again is technology, download what is left.