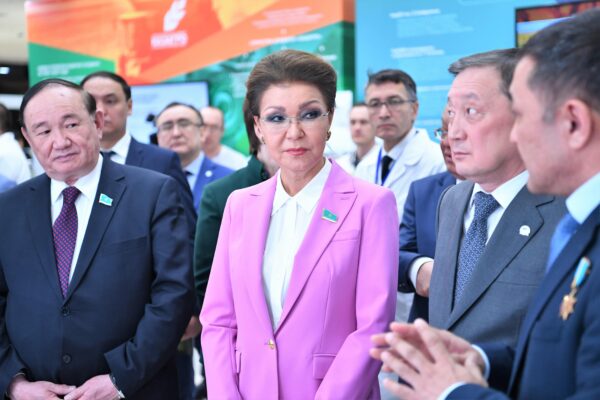 During the exhibition the members of the Senate presented the activities of a single distribution center, which is the only CIS producer of products and attributes of veterinary appointment for the identification of animals, as well as a mini-factory for the production of meat and meat and cereal canned camel meat. The project is the winner of the competition of commercialization of results scientific and technical activities.

Opening the meeting, Chairman of the Committee on agriculture, environment and rural development Ali bektayev reported noted that parliamentary hearings devoted to one of the most troubled and criticized, but it is a very important sector of our economy is directly related to the national security of the country – agricultural sector.

“At the initiative of the President of the chamber Dariga Nazarbayeva, the Senate held 12 working meetings, which were attended by over 60 representatives of agricultural associations, commodity producers and heads of subordinate organizations. According to the results of working meetings had produced more than 200 recommendations,”

In his introductory remarks, Nazarbayev stressed that the village is the cradle of our national identity.

“The roots of Kazakh identity lie in the village, it is a source of patriotism and repository of ancestral traditions

So close and clear to each of us the development of the village. Issues affecting not only 42 percent of the population living in rural areas, but also the entire population of our country. Today is no surprise the assertion that

despite the overall increase of income, people live in rural areas, to put it mildly, rather poor. Maybe that’s why agriculture, as an industry, stalled in our country?” —

Also in his speech, Nazarbayev noted that agriculture is a pivotal sector of the economy of Kazakhstan.

“However, with the reverent attitude of our people to their native land

Despite the fact that the number and rate APK grow, we see that for the past 10 years, the industry is stagnating. The share of agriculture in GDP over the last 10 years did not exceed 5 percent, and in recent years has been steadily declining”, —

said the head of the chamber.

While Nazarbayev paid special attention to the fact that years of constant and unsystematic reform of the agrarian sector led to the crisis in agriculture.

“Often the tables and figures we do not see the specific problems of the people. We need to pay attention to what is happening in the industry in the social dimension.

The quality of life of the villagers suffers from a lack of access to infrastructure. Under such conditions, social well-being of residents may not be satisfactory

and forming the desire to stay in his native village”, —

said the speaker of the Senate.

At the hearing provided by the Ministry of agriculture of Spargana Omarova, Chairman of the National chamber of entrepreneurs of Kazakhstan “Atameken” Ablay Myrzakhmetov, the head of the liaison office and partnership Food and agriculture organization (FAO) to Kazakhstan Kairat Nazhmidenova and others.

In addition to deputies in the discussion of topical issues of the agro-industrial sphere also took part the heads of regions, representatives of public associations and agricultural enterprises.

According to the results of the parliamentary hearings recommendations will be prepared that will be sent to the government.