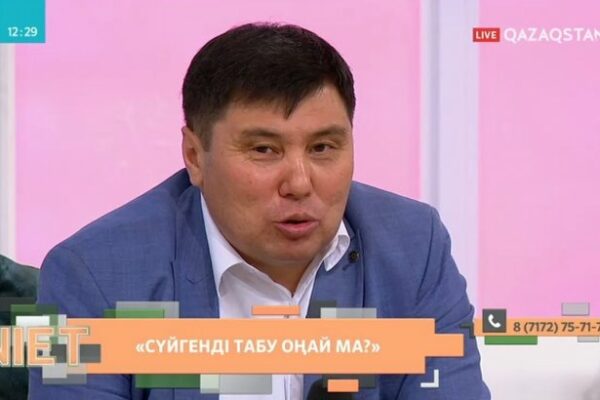 The words of Omar Spared,scientist, researcher Abay, religious studies, candidate of philological Sciences, about the girls middle-aged caused a resonance in society, especially among feminists. About it writes portal Stan.kz.

Now, many Kazakh families are kept in the house of the enemy. Why? Because the mind is not enough

If you give to the girl will, she will continue to walk. Nietzsche said: “culture begins with the coercion”. Excuses that the daughter she knows what to do, talk about the powerlessness of parents.

Our Kazakh ancestors never said that the child himself knows what to do. Have to say, “Hey, daughter, this year, will give Allah, I will give you away”. Previously, our heroes were given the daughter or sister for his friend, because he knew what kind of man he knew that he would not hurt her.

The girl is a commodity. And if the parents are unable to implement it, it’s their fault.

I, too, see the daughter as a commodity”, — said the candidate of philological Sciences Omar Spared.

“Stupid people will not go far”

The statement of scientists has caused a storm of debate, especially among feminists. Editor, writer and producer perizat Myrzakhmet on his page on Instagram wrote a post, urging to choose the expression before you go on the air.

“This is medieval!” feminist have criticized the book of the Deputy

“Everyone thinks that we are against the statements, “the girl is the goods.” He must have used this as a metaphor. But I noticed that this person often plays on TV, and the last time

he was on the side of the rapist, saying that it’s a man thing. Now he speaks out against unmarried girls

It turns out they can not choose their husbands or must agree to be a second wife?!

All we do to our girls studied, developed, was intelligent and aware.

From stupid people are born stupid, only descendants. So our nation will not grow.”

In Kazakhstan, women have no respect for

Blogger Laura Argyn believes that such words are not peculiar to the scientist.

“For Kazakh males woman not a man. Whatever he was Abay, a scientist, his brain is smaller than that of a snail. The worst — his words will embrace other men. But I hope there will not be enough,” said Laura Argyn.

Blogger outraged that despite the fact that the yard the year 2020, we are still discussing what should a woman do and what benefits brings to society.

“In Kazakhstan, a woman looks on as a housekeeper. I don’t understand how this man became a philosopher and a scientist, after all, his words show his ignorance,” she says.

Understand what you want

In turn, Omar Spared refuses to comment on his statement. On a question of journalists, he replied that everything said in ether and to justify not going. And also added that his utterance was not malice, and if he was misunderstood, it was not his problem.