To those who are unfamiliar with the culture of the Kazakh people, some customs and traditions which at first glance may seem very strange. But everything is explained simply. 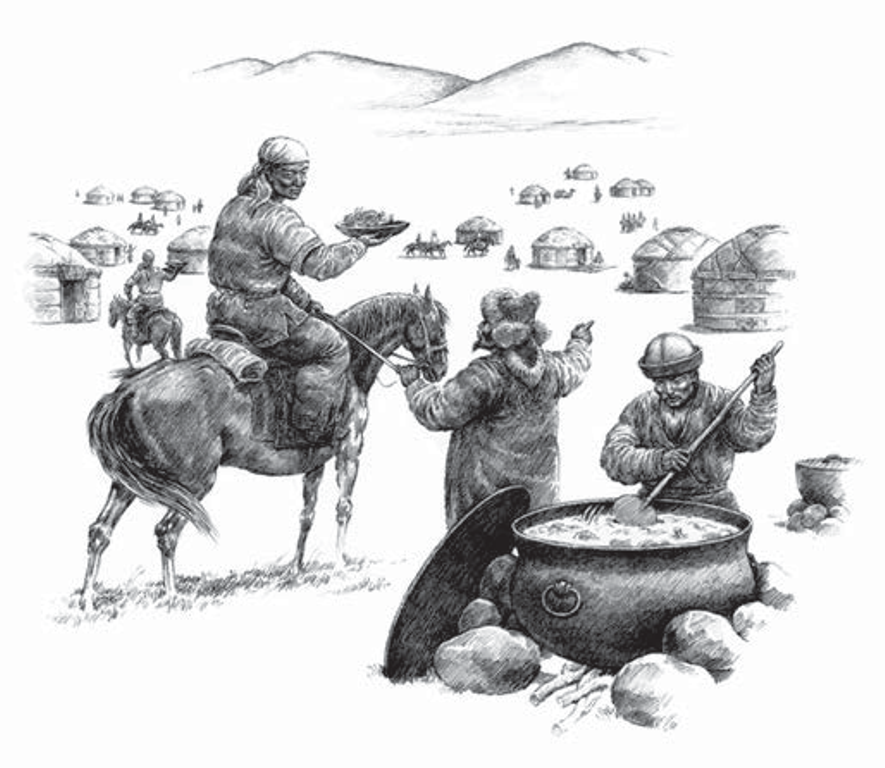 Kazakhs are by nature people cheerful. And it is possible that this quality came at them from the fact that until the 20th century, they lived in constant motion. Life in the desert requires frequent migrations in search of pasture. Sometimes it takes a lot of time, and not to miss, young compete in the composition of poems and singing songs. And during stops people of a more Mature generation share memories and stories about the history of their ancestors.

About this world Kazakhs say “Jalan” (false, world). There is also the expression “umshini sabyndy USA mode of OLAP clu Kerek” (life is short, as the handle of the kimchi — that is very short and we should live happily).

It is in this relationship for life and is the reason for the abundance of folk traditions. And it should be noted that most of them are positive. In other words,

the Kazakhs tried a spare minute to spend a fun. And it was done always together

For example, a researcher Johann Sievers (1762-1795), who was among the Kazakhs, not concealing surprise, wrote:

“Women sitting tightly around the fire and sang songs. They echoed the 15 men from the yard”

A long life of happiness

The happiest people Kazakhs of centenarians. Those in the Kazakh steppe was not uncommon. This is mentioned in the books. Trail “Kazakh is Chechen” (one Hundred Kazakh speakers), “encyclopedias Abai” (Abai, encyclopedia), A. Seydimbek “Kazakh kuyi coz oneri” (Art of Kazakh kui), Time Isn “Uly Dala” (the Great steppe), and others. For example,

And this is not a complete list of centenarians steppe.

Grigory Potanin, each of Chokan Valikhanov, not once stayed in the village of his friend, wrote:

“The Sultan Genghis (father of CH – B. O.), in spite of his 85 years, was still vigorous man. Until recently he had been traveling not in the carriage, and on horseback”.

The departed continue to live

When a person in old age goes to another world, Kazakhs mourn his bitter tears. But at the same time saying:

“This is the one! We should be happy he lived a long life”.

A year later, when the time of mourning ends, conduct As – the anniversary of the death of a man. With this begins a new time.

The Kazakhs say: “Tr trsln gusau Kerek” (the living must continue to live). During feasts, all waiting for a rich treat. As a tribute to the late hosts large entertainment events .

Akins will compete in a traditional music competition, praising the deceased. Horse races are held, where the winners give expensive gifts. Balwani (wrestlers) compete in force and dexterity. At competitions in archery, everyone wants to win the title of marksman. Competitions on the run and even fight among women — “Aten training”. Then in the desert for many years remember large AC.

Rarely, but has happened in the Kazakh steppe, and so that the AC were held during the life of the person. So society showed their joy and respect who are over many years. Such aces was not like a real funeral, because the man was alive, and was called either the AU or The.

Such As was carried out only at the request of the person or his family. On a similar celebration in the first place invited peers “responsible” As.

Such As were conducted, for example, when the 80th anniversary of the grandmother of the great Kazakh composer Bakhytzhan baykadamova. About it in his memoirs, told the sister of the composer Manabique Karaldina. Here’s what she wrote in the book of memories “Alma Easter geldiginde” (When bloomed Apple).

“In those years Segetal grandmother turned 80 and the whole village showed a wish:

“This is exactly the case when it is necessary to honor bibiche. In this family lived more than eighty only Zharylgap bi. It is unknown if she’ll be around his age, let the son hold her As”.

With the birth of a calm and restrained father said nothing. But everyone understood that the desire of the majority he perform.

In all directions was sent out horsemen to invite guests. The father said to the grandmother:

We often heard that “our grandmother (grandma) was in his youth a good singer”. But the singing octogenarian old woman to listen to was unusual.

Centenarians have very few peers. Then were still alive old men, comes to us distant relatives. As we have learned, and invited two of the elders. Grandma jokingly and lovingly called them “ek Amir” (cancer two). It is known that the peers always have their special relationship, often humorous. In the village women began to banter, “Oh, two cancer got freedom!”. When two elders came to the house, grandmother said:

Well, ek Amir, pass to the Ter-pride of place!

Continuously arriving guests… a few days came a very thin, dressed in a long Chekmenev, a tall beardless man. Dismounting from his horse, he immediately a loud voice began to sing.

A lot of the time I have Baltika,

Never my ancestors stayed away from the fun for her.

Invited the girl singer, she was eighty-she

Mean, will there necessarily Kokan Zhusip her.

Here I am, don’t worry, my beauty-her

To my sweet, invited me to her Oh-ay,

How I will not come to her, doy doy, doy…

He sang in a low voice and stopped. It was the singer, who is popularly called Coca-Zhusip. In the past he has repeatedly been verbally competitions–aitys our grandmother Szegeti.

It was a decent voice and another guest named uke. They are all showing their art and gave the audience great joy. At noon came the turn of our Szegeti even. She sang “Toymaster”, sung in his youth.

One of the cheerful, fun one

For fun the I have come, my dear!

Gold and asyk for the game in his hands,

I came to you for playing, my dear!

I will not cease, I will sing and start the fun

My dear, my dear!

When even sing the song, uncle amirali, who came from Orenburg, where he studied and hugged grandma. The elders Toccoa, uke, Kokan Zhusip very fun time. They asked the grandmother:

“Sing that song that you sang on the relative who offended you is not the case”.

Grandma did not take long to beg, and singing a humorous song-back, composed in his youth on the move and who immediately went to the village.

We children didn’t understand much, but I remember how the elderly with laughter fell in a row. Probably remember a time when I was young horsemen, and my grandmother was a young beauty”.