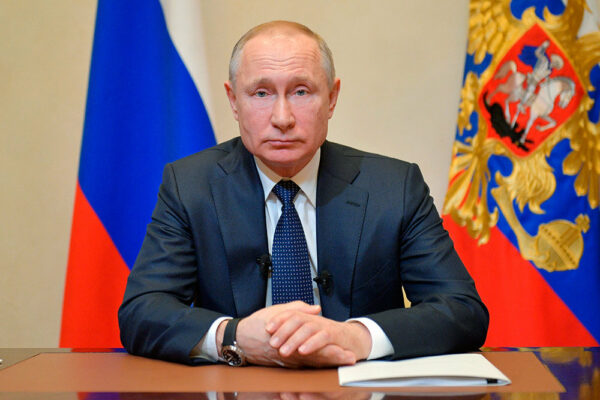 There are in General dissatisfied with the existing world order. So this statement was not shocking or unexpected. It is well within established policy and ideology of a politician.

Russia still can not get out of the paradigm of territorial expansion, which was relevant in the ancient world and middle ages

By inertia it still operated on the minds in the first half of XX-th century. But today is an anachronism. We see that the leading countries of the world are not guided by an outdated paradigm of extensive growth, they are for intensive growth through education, science and technology.

Those States are the technology leaders of the world. Through Hollywood, their universities, literature and music they have power over the minds far beyond the United States. There are no rational reasons for the seizure of foreign territories for them there.

And the Russians, and not only them, there are phantom fears that America wants to seize their land. But the US is not going to seize land, even the neighboring countries of Canada and Mexico.

When the area is almost a curse

As for Russia, for her desire to increase its territory is absolutely tragicomic. After all

And so Russia has a huge territory, which can not fully develop

You should also be aware that in recent years the population of this country is declining. The density of inhabitants, especially in the Urals, is extremely low, rich land not really mastered.

Not being able to solve their chronic problems with modernization, Russia is trying to compensate for the traditionally expansionist way. The consequences are extremely negative.

In the last century the famous Russian philosopher Nikolai Berdyaev wrote that “Russian history ate Russian geography”. In other words, excessive spatial growth has deprived Russia of the possibility of quality development.

But, as you can see, the current Russian policy conclusions from the mistakes of the past do not.

Post-Imperial syndrome gives rise to a General dissatisfaction with the position of Russia in the world and the fact that the former Soviet Republic subordinate to Moscow once, out of the orbit of its influence. And when leaving Union “dragged foreign”, which, according to the Russian leadership has historically belonged to Russia.

After all, when something “primordially Russian” territory also belonged to other States and political entities.

The USSR is impossible

— Why are Russia’s neighbors so cautiously embraced Putin’s speech, although a direct attack against a particular country was not there? Even after verifying that it was about Ukraine.

— Any application that is associated with territorial claims, is reasonably alarming.

If Russia has retained its cultural and economic influence in the former Soviet Republic, she would be the center of attraction in the post-Soviet space.

the country had a great culture, tremendous scientific and technological advances, is facing a crisis in almost all spheres of development. And to solve their problems increasingly chooses one path – the power

So today, Russia has become more the center of the rejection.

— In your opinion are there any prospects in the restoration of the former Soviet Union?

— The restoration of the Union impossible. For this there is no common ideology or economic resources. There is no rational economic basis for enterprises that will be profitable primarily to Russia itself. It will get a lot of subsidized regions. It will be an unbearable burden for the Russian economy, which is in a very difficult situation.

Also, the Association may cause

within 30 — 40 the next few years, ethno-demographic situation in Russia is completely different

And obviously not such on what to expect politicians, dreaming of a restoration of the former Soviet Union.

But people who are under the post-Imperial syndrome, are unable to think objectively and consider the facts.

— Maybe this whole Putin’s speech was aimed at the Russian electorate, from which he expects support for the upcoming referendum?

— Yes, such statements usually came from the leader of LDPR Vladimir Zhirinovsky and other politicians. But Zhirinovsky is still not the President, and

Putin – Chapter two nuclear powers, and he can’t afford what you can afford policy that is similar to Zhirinovsky

Although they need to clamp down, as they constantly complicate relations between post-Soviet countries, including Russia’s ally. But we see that Putin is also subject to post-Imperial syndrome, and still believes that the collapse of the USSR is the greatest geopolitical catastrophe of the twentieth century.

And lately, he sees himself as a politician who can fix this “historical mistake” by restoring the former Union

The prevailing majority of the Russian electorate also thinks in terms of the former Imperial grandeur. Of course, this speech is aimed at them.

Such statements are like a significant part of the electorate. And it is also sad, because their power over go on indulging your systems than on the development of their country.

In the meantime, the world is developing. For example,

little South Korea has surpassed Russia not only technologically, but also in terms of GDP

Over the past decade the UK has become one of the leaders in manufacturing electronics and cars. Is the world’s largest manufacturer of cargo vessels. While Russia, which in the 60-80 years of the twentieth century was one of the world leaders in technological development, today, more deindustrialised and deintellectualization.

A sad example of Ukraine

— The completion of demarcation and delimitation of borders of Kazakhstan, in my opinion, it was a big victory for the authorities, particularly the Ministry of foreign Affairs. In the process of negotiations on the borders with China and Russia had a lot of criticism from the opposition. Do you think this theme can again swim in public discourse?

— Unfortunately, today the value and importance of the delimitation of boundaries severely undermined. Because there are precedents, when one side shows that these boundaries cannot be considered immutable. As it happened with Ukraine.

China also periodically publishes maps where part of the lands of neighboring countries shown as part of Chinese territory, including our land to Balkhash.

I’m afraid the document on the borders that they once signed, will not be for them the limiting factor. Therefore, we must rely on additional constraints in this world, such as contentores other leading countries of the world.

The sociologist noted that the weakening of Russia would have bad consequences for the entire post-Soviet space and the world at large. Internal tensions and the weakening of this country will affect neighboring countries, he said.

I think that in this way Russia is just waiting for the degradation and most likely crash. And the collapse of the second nuclear power in the world a very bad scenario. But to prevent its implementation must above all the Russians themselves.