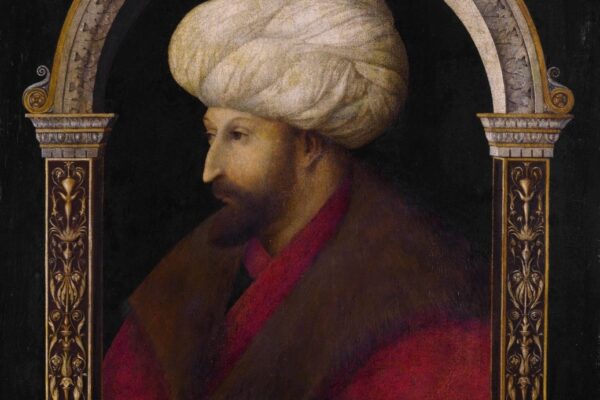 The figure of Mehmed II, seventh ruler of the Ottomans, history of the Turkish state is paramount. His reign marks the beginning of a new stage of development of the state.

Fatih Sultan Mehmet conquered Constantinople, he received the title of Fatih the Conqueror at the age of 21 and turned the Turkish state in the Empire

During the Balkan wars and the Venetian crusade, the Sultan ensured Ottoman control over Serbia, Sea and Trebizond (modern Trabzon) in the Northern region of modern Turkey. In the Treasury of his victories the conquest of Bosnia, Albania and Anatolian territories.

The most famous and publicized lifetime portrait of Fatih Sultan Mehmet in Turkey knows every student. The author — Italian Gentile Bellini. Portraits several. And the one in question, left the country for five centuries!

It is known that the Sultan, too, could draw and was good at painting. In the Topkapi Palace in Istanbul kept the notebook with his children’s drawings. Incidentally, this image of people and other living beings. Let me remind you that in Islam there is a ban on depiction of living beings, and especially humans. Because to create is allowed only to God.

According to legend, the Sultan always wanted to have your own portrait and made a choice in favor of Italian artists, which makes sense. So a meeting was held of the artist and the ruler of a great Empire

One of the first meetings Mehmet criticized a painting by Bellini with the image of the severed head of John the Baptist. They say that severed heads do not look so. And… have shown the head has just been executed…

Italian held in Turkey annually. Ruler and artist parted almost friends. But a few months later the Sultan died and his son and successor, the eighth Sultan of the Ottoman Empire Bayezid II, sold all the works of Bellini. The ungrateful child.

I can not say a few words about the Ekrem Imamoğlu, the current mayor of Istanbul. The owner of the most significant city of Turkey it was a year ago. The victory was not easy. After all, Imamoğlu is a representative of the opposition Republican people’s party of Turkey. And she is considered the party of the elites, that is, a party of educated and progressive people.

The election, he bypassed the candidate from the ruling Party of justice and development of Binali Yildirim, the closest ally of Turkish President Recep Erdogan.

Istanbul — financial and economic center of the country. President Erdogan has repeatedly said that winning in this city is a victory in Turkey. So

Turkish analysts believe the current Istanbul mayor, a potential leader of the country

The point is very important for understanding the political background of the story with a portrait.

My friend from Istanbul Altynbek Isabekov explained that in Turkish universities are sensitive about their past. Patriotism is nurtured from primary school.

I remember about 15 years ago throughout Istanbul were posters in honor of the anniversary of the conquest of this city.

My question is, how political forces in Turkey may perceive the purchase of the painting for a million dollars in the period of the pandemic, he replied:

“Outraged liberals, leftists, Republicans. More conservative was just silent, and there are many — almost half of the population. This is just the supporters of the AKP, Erdogan’s party. But the portrait is not just a portrait of a Sultan, the image of the conqueror of Istanbul. The nationalists (supporters of the party MHP, Milliyetçi Hareket Partisi) this acquisition will be happy”.

Famous Kazakhstani art historian Valeria Ibraeva believes the purchase of a portrait of Mehmet the Conqueror a very important gesture from the Turkish state.

— It is known that during the Second world war, Churchill signed the budgets of museums and replica “How is it that we have a war!” replied: “And for what are we fighting for?”

Pandemic is also a kind of war. But the pandemic is a temporary phenomenon. And the Turkish government looks forward. The pandemic will end, and the art will remain.

And this portrait is not only a work of art, it is important for the current political situation in Turkey. Neo-Ottomanism, on the one hand, Bodrum conservative currents in Turkish society, and on the other revives the culture, which at the time was banned by Ataturk.

Ottoman period in the history of this state one of the most interesting. And, in fact, fundamental. So this is a very important gesture from the Turkish state. To talk about the flourishing of Islamic conservatism and at the same time to acquire a European painting Gentile Bellini comes from a well-known Venetian family of artists, and his work is important for world art history.

Secondly, it is a portrait of a man, which is very important for Turkish history.

Thirdly, it is evidence of globalization in the 15th century, the distribution and mutual influence of cultures. At destruction and capture of Constantinople at the same time picturesque the recording of the characters who made it. On the one hand, civilization collapses, and civilization begins.

Here comes a lot of interesting thoughts. That is, it is not a simple purchase, it is a reason for many discourses — civilizational, historical, political, — says art critic.

Valeria Ibraeva sure that this act of the Turkish state only with a plus sign.

Art, master of philosophy and history of religion, curator of contemporary art Yana Malinovskaya agree that it is really good and the political and historical points of view.

— Mehmet the Conqueror iconic historical figure and the state is a good information occasion to boost national pride. In this case, the price of the painting does not matter. I believe that the event is not only cultural, but also political.

Because there is no pure culture, religion or politics — all hybrid. Therefore, all events can be viewed from different planes

And another interesting aspect is that Turkey is a Muslim country, and Islam does not recommend to represent a person. Although we certainly remember the beautiful Persian miniatures. And then a portrait of state purchase.