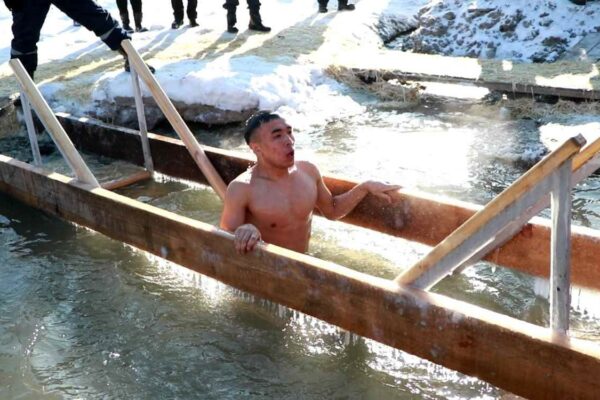 Yerzhan believes that since Kazakhstan is multinational country, its citizens must be respectful to all holidays.

Not only in Almaty, but in the Nur-Sultan among Kazakhs were many willing to plunge. Some waited for their turn for hours. Kazakh, which is the first time I went in the ice bath, I promised myself to come and certainly next year.

“It feels great. Participating for the first time. I’m a Muslim, but wanted to test himself, to conquer his fear. Achieved my goal, I want to come again next year,” said the woman.

Many admitted that they decided to participate in order to strengthen the immune system.

What is spoken by the Muslims?

Deputy head of Department of “Sharia and fatwas” SAMK Hasen Amankulov said that Sharia does not favor such action on the part of Muslims.

Doctors have warned of the danger of bathing in the hole

“Every year in January are the Epiphany bathing. This day in Christianity is considered sacred. The hole comes to the Christian clergy and the necessary religious ceremony. It is believed that the water in the lake or river gets specific medicinal properties. There is a belief that those who dipped into the hole, get rid of sins,” explained the Imam.

“Some say that have no relation to religion, and came only for the sake of health. Of course, Muslims are urged to follow the health and cure, but it is best to find other days”, — said the expert of the sbmc.

What say representatives of the Orthodox?

nothing wrong in bathing in the baptismal water is no, because it is not a religious rite, but only the tradition

“The holiday “Epiphany” is not a religious rite. It’s a tradition, to religion it has nothing to do. So on this day, can swim and those who adhere and those who do not practice Orthodox religion. On the eve of this festival, some plunge into the hole to health, to strengthen the immune system. In these days the water is particularly clean. And people believe that water will go all bad. It all depends on internal belief of the person.

But the Orthodox faithful in this day should come to Church and pray. Representatives of other religions or people that are not in any religion, you can just swim in clean water and purify the body and spirit from bad. And there is nothing wrong,” said father Eugene.