The majority believes that we should be “your Islam”, although many admit the simultaneous existence of several currents. 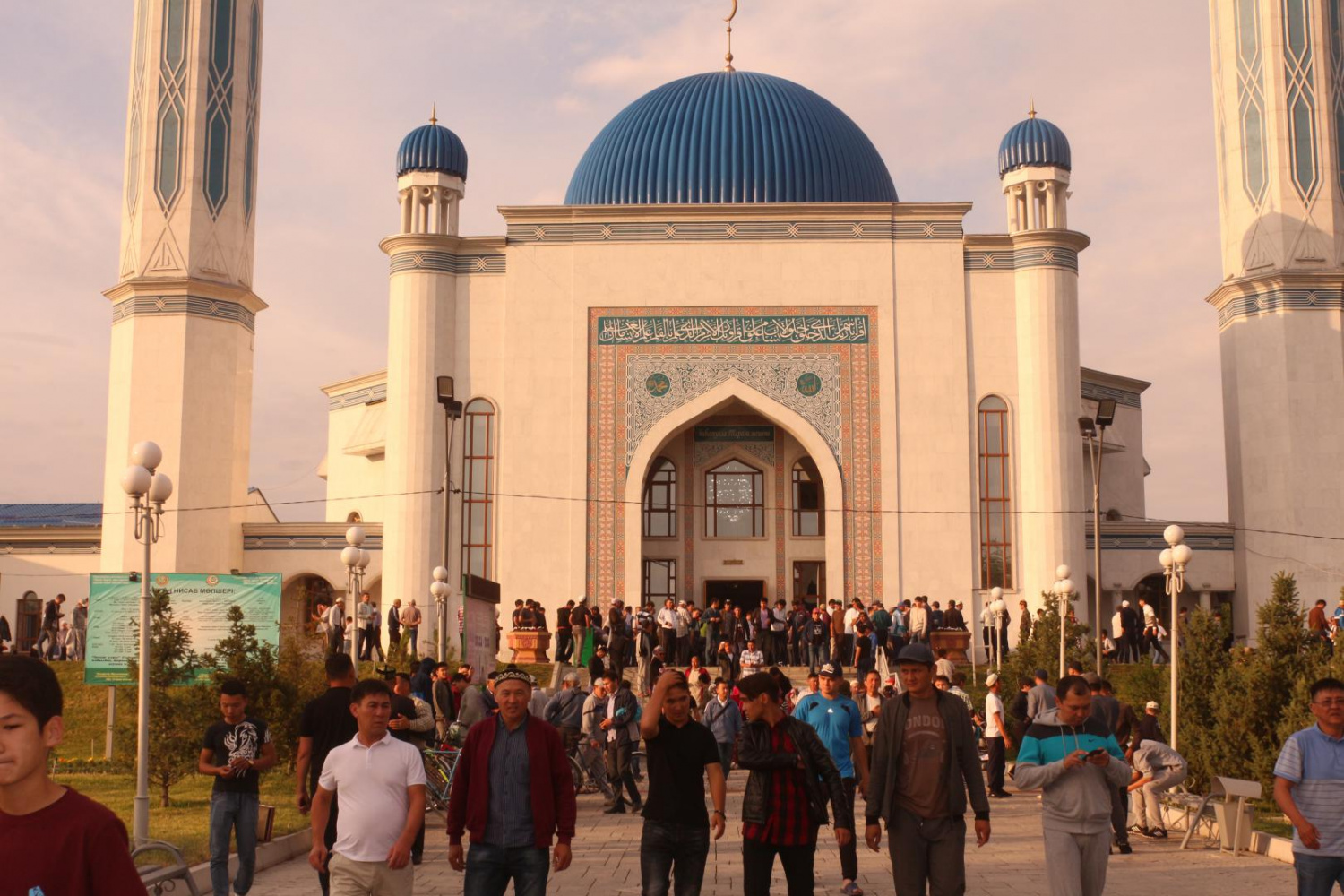 A growing number of citizens who consider religion one of the most important values. And in the coming years, may occur a “religious Renaissance.” The young generations have new values. The state and society should react to it.

Write about the authors of the study “Values of the Kazakhstan society in sociological dimension”.

Patriotism today is not in a special fashion

The next Chapter, the authors devoted to the concept of patriotism as a tool “of the formation of solidarity and unity of society.”

About the same a lot lately and talking in various media. Moreover, as noted by the authors, for the most part

That is fraught with many troubles. In particular, the intensification of emigration. And leaving a highly skilled workforce of all nationalities.

The second wave of emigration started in Kazakhstan — Sultanov

Respondents were asked, “how has people’s attitude to patriotism in the last 5 years.” The answers are the following:

Among those who believe that patriotism has declined, most of the urban population (24.7 per cent). The villagers, on the contrary, in most talked about it strengthening over the last few years (24.9 per cent).

This again confirms the value differences between urbanites and villagers

Of 28.8% Russian, 22.2% of members of other ethnic groups and only 19.7% of Kazakhs believe that patriotism has diminished.

The attitude to patriotism also affects the financial situation: 43,8% of the group with the lowest income level believe that the Patriotic sentiment increased.

Among the wealthy citizens share this opinion only 20.4% of

The study also revealed a fairly high religious sentiments in the society.

Islam is practiced by 2/3 of respondents, Orthodoxy – one in five atheists less than 2%

The rest for unknown reasons to this question refused to answer. 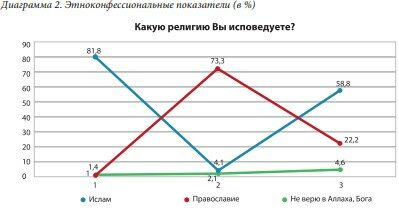 Over the years of independence the country the combination of “Kazakh — Muslim” and “Russian — Orthodox” completely stuck and became synonymous, say the authors.

Thus religion are different, even believers.

Almost two-thirds took part in the survey chose the answer

“I’m a believer, but in the religious life do not participate”,

High holidays and some rituals.

The percentage of respondents who “in the community and regularly visiting mosques or temples, observe ceremonies, prescriptions and prohibitions”, less than 10%. However, in the southern regions for as much as 18%.

Why in Kazakhstan there is a growing number of atheists?

— Survey results show an insignificant growth of religious identity. What makes us think about the need for the development and promotion of state civil unifying ideology, — the report says.

Among the citizens of the faithful was not much, but still higher than among rural – 8.6% and 6.3% respectively. The share of formal believers among villagers is higher than among city dwellers – 65% vs 58%. This result

Religion the majority of the surface

Gender breakdown there is a difference, but minor.

But women are more celebrate the holidays and observe the rites.

At the same time, the share of non-believers among men is also higher – 35% versus 29%. 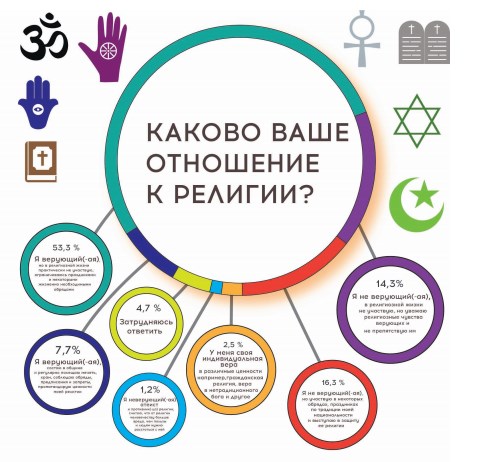 Therefore, the religiosity of respondents is affected by the level of education:

in individuals with secondary education are more loyal to religion than those with a higher (8.8% vs 7%),

The unbelievers one-third of the respondents has a high level of tolerance against believers. Among them

equally those involved in some ceremonies and festivals, and those who did not participate, but respect the religious feelings of others

Thus, the religiosity of the majority of Kazakhstanis surface,

with a very low level of participation in religious life

Will there be a religious Renaissance?

Reacted positively to the idea of further strengthening of the role of religion most of the inhabitants of the West (51.2 per cent), southern (43.3 per cent) and Eastern regions (41.9 per cent) of Kazakhstan. In the South most of those in Zhambyl oblast (71,3%), and in the West – in the Aktobe region (82,9%).

Gender difference in positions on this issue was not there. But visible dependence on age.

Young people from 18 to 29 years increasingly supported the idea (45%),

Conversely, in the group older than 60 years, 40% were in favor of reducing the role of religion.

Rural residents more than urban to support the strengthening of religion (43.2 per cent versus 38.6 per cent).

Unmarried and divorced less religious (55%) than married couples and also widowers and widows (69%). Advocate for the growing role of religion 39% and 45.4%, respectively.

62.5% of the poor believe that religion should play a smaller role in the life of state and society

In the rest of the other groups, the distribution of opinions is the opposite. 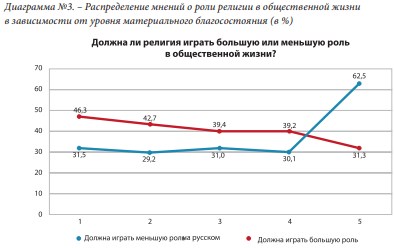 Almost 60% of respondents believe that “Kazakhstan needs to dominate your Islam as a faith of our ancestors”. According to the territorial distribution of 72.1% in the South, to 66.5% in the East and 60.8% in the West.

Thesis on “Islam in Kazakhstan should not depart from the canons/rules that came to us from Arab countries or from other countries” support only 28.8% of respondents, while 33% disagree with him.

With the opinion that “everyone can have their view on Islam, the valid existence of different trends in Islam”, agree about a third of the respondents. And about the same number of votes against.

New values of the younger generation

While in the West most of all complaints of discrimination because of their religious affiliation. Although the overall numbers do not look frightening. With this problem in the West faced only every tenth.

Traditional Islam is a barrier to radicalism — expert

The credibility of religious organizations is quite high in all regions — more than 60%, but fully trusting only 21%. And 47,9% trust to some extent.

In the centre, almost 20% of respondents do not trust religious organizations

The analysis showed that in the West, South and East of the country to observe the process of rapid growth of religious identification. It is this geographical zone, covering the West and South and then turning gradually to the East, can then be accented for the solution of problems related to ideology, the authors note.

Generation of 18-29-year-olds – people with new values, so you will need a change of emphasis in the ideology of the state