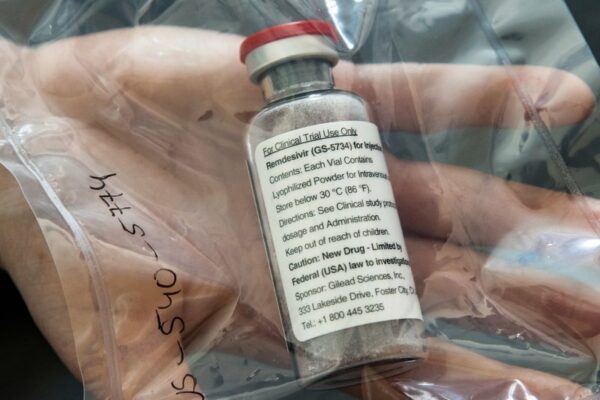 Ramdevpir experimental drug. Marketed as a drug for the treatment of patients with severe cases Covid.

It is in any case not a panacea for the coronavirus. But clinical trials indicate that it significantly reduces the time spent in hospital prior to discharge.

Given the workload of hospitals and lack of medical resources, not only in the United States, the FDA urgently approved the use of the drug. Manufacturer, the American company Gilead Sciences, then decided on a price, placing on its website an open letter.

Clients with private health insurance companies in USA one bottle will cost $520. Minimum course of treatment is five days and six bottles. That is, the entire course will cost $3 120. For Americans – members of certain government programs the cost of the bottle is slightly cheaper.

However, the company indicated that the $390 is the price for “developed” countries. However, considering the words of CEO Daniel O’day, likely to developing countries would not be cheaper.

“Realizing that in the fight against coronavirus very important time, we decided to install for all governments one price and called her. This is to ensure that governments do not spend time on negotiation and conclusion with our contracts,” he said.

Delivery only for hospitals of the United States and other governments.

Too expensive or less than expected?

Announced the cost of the drug has been controversial — at least in America.

Some human rights organizations and members of Congress say the company openly uses the Americans in a difficult time for the country. So, a member of the house of representatives Lloyd Doggett called the price “outrageous.”

“Without investment of the taxpayer in $ 99 million this drug would never have appeared, — he told NPR. — So it is the taxpayer who took on the risks of investment and are entitled to compensation. At least the medicine affordable to all Americans.”

Public Citizen, a nonprofit group of consumer protection, I agree with Lloyd.

“It is insulting demonstration of hubris and contempt for the public. Gilead set the price of a few thousand dollars for medication that should be in the public domain”, — said Peter Maybarduk, Program Director of citizens ‘ access to medicines.

In the quarterly financial statements Gilead indicated that its

And most of this money is used to increase production capacity.

Citing this report, Geoffrey Porges, an analyst at investment Bank Leerink SVB, said that the announced price for the drug “stunningly good”.

“It is unprecedented that the price of the drug below medical costs that it saves,” said Porges CNN.

In his opinion, ramdevpir can save you up to 40 thousand dollars per person, if you do not allow the patient with COVID-19 to need intensive therapy. And there are still a great value, which is not included in the price of Gilead, he says.

“Consider the enormous public value that the state gets to make the patient less contagious, quickly return it to the society and to work,’ said Porges. All these social benefits in this price not even taken into account.”

However, the ICER President Steven Pearson said: his words “responsible price” suggest that the drug ultimately will improve patient survival. This moment still in the process of clinical research. If the improved survival is not confirmed, the price must be clearly lower.

Many experts say that this

as it is now advertised.

According to estimates of the ICER, given recent reports, another medicine, dexamethasone, to reduce mortality from COVID-19. Therefore, could become part of standard treatment. And now its cost for the course is at times lower than Gilead.

Moreover, many biotech companies around the world are on the verge of the approval of their drugs.

“It is possible that putting the price Gilead is committed as soon as possible to discourage investment. That is, to remove from the market the “cream”. But the main danger in the other.

Established a price precedent and other companies can already estimate how much they need to sell their products to capitalize on the universal fear of the coronavirus.

That is, we can come to what would be more effective than the drug, so it will be more expensive. Strap in and $3 thousand for a course of treatment will be the lowest,” said VOX Stacy Dzetsina, Professor of health policy at the Medical school of Vanderbilt University.