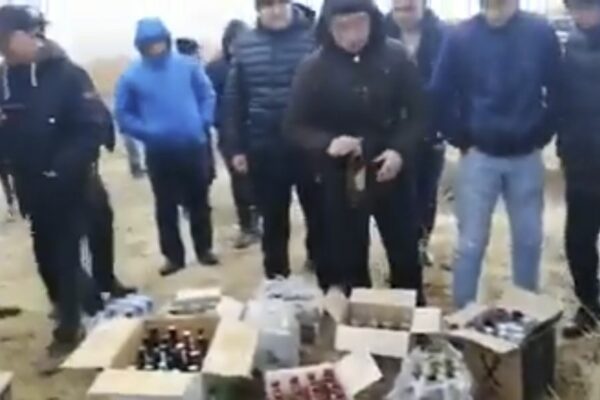 Video promotion became viral in social networks. Users share personnel and encourage people from other regions to do likewise.

“I am very happy for this act. May God be pleased with this youth. Kazakhs alien vodka. Let every town, village, district will start the same action and be an example to the younger generation. It’s time to become real people, Kazakhs!” — wrote one Facebook user Askar Smagulov.

Opinions in social networks are divided.

It is not in alcohol, and in people

Some bloggers have written that this approach will not solve the problem, because it is not in alcohol, and in people.

“Vodka is evil. Cigarette — the enemy. The Internet is the enemy. All this is the wrong concept.

In fact, without you they are nothing, just stuff. They become harmful when people use them

Man is his own enemy. If you have good intention, no need to look for enemies outside,” wrote one of the bloggers Almas Takabaev.

Another blogger, Orken Kenzhebek, believes that in addition to ridiculing the right things, nothing else, these people (social media users) do not know.

“People rallied to lead by example, to show that they refuse from alcohol, and encouraging others to support this idea. Why would it not show and why not talk about it? Are we a country where there is no alcoholism?

In the villages the shortage of brides – browse kissme

Last year, the government forcibly cured fifteen hundred alcoholics. 34 thousand families one member is an alcoholic and is listed in the attached, 31 of them teenagers. In Kazakhstan, every fifth crime, half of the deaths, 60% of household scandals occur as a result of drinking alcohol. Last year 74% of men were put cirrhosis of the liver, and many of them have earned it with vodka. You still funny?” — the blogger wrote.

Orken Kenzhebek along with this, proposes to sell alcoholic beverages only in specialized stores — alkomarket, as is done in developed countries. According to him, Finland has thus reduced the level of alcohol by 20%.

“Doesn’t the state take such steps, but these horsemen are doing something to fix this game”, — he wrote.

To date, this is the ninth village, renounced alcohol. According to the information portal Azan.kz, before alcoholic beverages refused, and the village of Almaly Zhusansay in South Kazakhstan region; of Tendik and Krasnaya Polyana in the North-Kazakhstan region; Enbek village in Akmola region; Sarybastau, Kakpak and Zhylandy in Almaty, as well as the village Asgent in Kyzylorda.

In all these localities, according to the publication, sell, or drink alcohol.