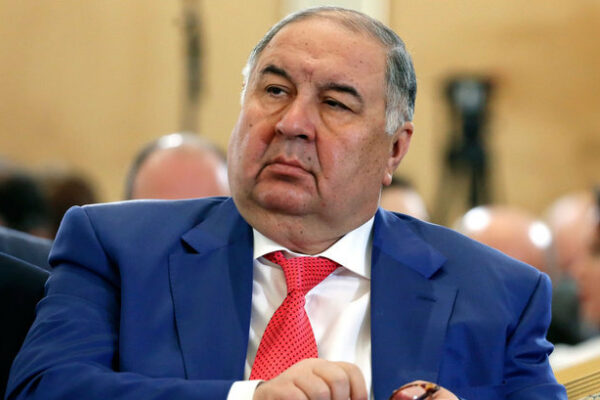 With Usmanov the author Henry Foy was found at a hotel on lake Tegernsee in the Bavarian Alps. At the last moment the meeting was almost canceled. Usmanov has relied on a tough day and added: “Frankly, if you want to know everything about my life, we will need at least two bottles of vodka”.

For freedom of choice and beautiful women

– Without vodka what kind of conversation? — said Usmanov. The billionaire raised a toast “for friendship”, “freedom of choice” and “sports, friends and beautiful women.”

The interview took place in the restaurant of a five star hotel. Together a meal of Bavarian food, which was attended by Usmanov and translator, at a cost of €288.

More than a quarter of this amount (€62) was spent on vodka.

About Putin and relations with the authorities

If Usmanov is close to Russian President Vladimir Putin? The billionaire answered that communicates with him, but no personal job from it never received.

Putin does not need the oligarchs, only a strong state,

— I acknowledge him as the leader of the country which you are a citizen. Respect him. I think that currently he is the leader number one in the world… But I never had anything to do with specific tasks, — said the billionaire.

Under the mission he meant the statements of the US authorities that some Russian businessmen are acting on behalf of the Kremlin. As you know, in January 2018, the U.S. Treasury submitted to Congress the so-called “Kremlin report” “list of senior Russian officials and businessmen close to the Russian leadership”, it included and Alisher Usmanov.

“His wealth I don’t have the state”

Usmanov stressed that it is not a oligarch. According to him, their wealth to the state , he is not obliged, as

Nobody never gave nothing, he said.

The billionaire admitted that his government often helped.

Since then, I started to do big business, the state was very useful, we never refused, — said the billionaire.

Not afraid of sanctions

Usmanov has assured that he is not afraid of introduction of sanctions against it. According to him, in his life he had seen much worse things. However, he admitted that if that happens, he will be “hurt”.

– How can I be afraid of sanctions when faced with much more serious things? I don’t deserve them, but I will be hurt, if they come.

I do not interfere in any political issues

In 2014 after sanctions against Russia due to the annexation of Crimea Usmanov has reduced his stake in USM holding from 58% to 48%. Eif against it will impose personal sanctions, ethas to save the company from negative effects.

According to the billionaire, to apply to business , political and military means of fighting is wrong.

– Russia is in some ways a superpower. And the sooner its partners understand this, the easier it will be to make a deal. I am sure that millions of people think so, — said Usmanov.

In August 2018, the billionaire sold his 30% stake in the football club “Arsenal”. Bought her billionaire Steven Cronce, with whom Usmanov for many years fought for control of the club.

– If we work together, surely would have achieved more. But there will come a time for even greater success. Fans of “Arsenal” will be back at the stadium, commented on this issue Usmanov.

According to the billionaire, his departure from Arsenal was like a farewell with love.

– And how to deal with an old love? Need to find a new one, he laughs

And this new passion may be for him to become the English club Everton. The controlling stake is owned by the partner and longtime friend Usmanov, Farhad Moshiri. According to Usmanov, if he offered, he gladly invest money in this club.

– I think about my investment in it. If you join the “Everton” will be wearing his shirt, he added.

And also does not exclude that may invest in the construction of a stadium for Everton FC.

Life is not eternal

Their assets, the billionaire plans to split between the family and the leaders of his companies.

– Life is not eternal. Many helped me. I also intend

to help his family and their managers, giving them their shares: 50% family, 50% of managers

In my opinion, they deserve it. Everyone who works today at a high position, will get his. It’s in my nature.

If fate is something given, you have to share

Usmanov denies that he owns the publishing house “Kommersant” in 2019 dismissed the political correspondents of the newspaper by order of the shareholder.

Sometimes I Express my opinion to the editor about articles or something like that, he says, calling the dismissed journalists as “good”.

Foy notes that one of his friend the journalist fired for article on Usmanov.

– You know, in “Kommersant” often appear rumors about me. Believe it just not worth it, — said the billionaire.

They are often mistaken

Usmanov is familiar with the owner of football club “Chelsea” Roman Abramovich since 1986 and calls him “very good friend”. With Foy discussed Britain’s decision not to renew the visa of the businessman in 2018.

– When talking about who has invested a lot of money in the UK, supports Chelsea and is proud of London, I believe that at least he had to talk and explain what he needs to do to stay in the UK. I think in this case was influenced by politics, — said Usmanov.

Turned on its head

I knew that this company would turn the world upside down, says Usmanov on his early investment in Facebook.

By his own admission,

the billionaire has invested in Facebook $460 million directly and another $420 million through the Fund,

the investments returned more than fivefold