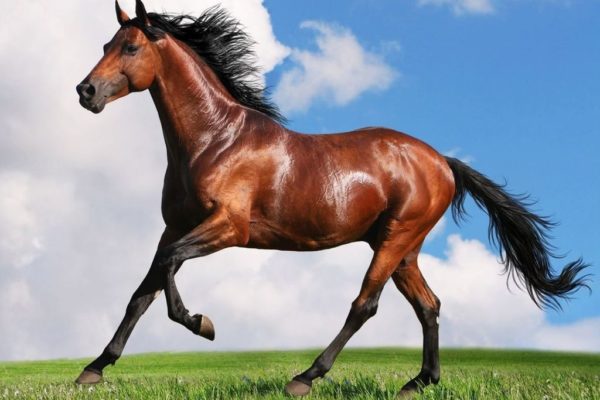 There are many Proverbs proving special attitude to the horse in the Kazakh society. “Arystan – a of patsey, July – small Patsany” (lion – king of beasts, the horse — king Pets). “Kymyz – alumni any, at – alumni Jany” (Mare’s milk – the blood of man, horse – man’s soul) etc.

And the Kazakhs say:

Scientist Ahmet Toktabay, author of “the cult of the horse of the Kazakhs”, your work begins:

Wanting to see if the owners son, Kazakhs ask: “Tabulary bar mA ed?” (Is there someone to tie to hitching post-horses?)”.

Especially prized horses is a hardy and swift-footed. So, you can remember the following story: Bai Hamza wanted Kulgera, famous horse ahana sir Karasawa, and turned to Akhan:

The podium of the great steppe: beat of horsemen — the tradition Kyz WW

“Let Achan sell me your chestnut, in payment I will give him all the beauty of the clan atygai-karpyk that he loves, and moreover one hundred horses”.

People versed in horses, the people call sansy. Spoke to him when he wanted to choose from a good young horse. Be sure to consulted with them and when training horses to be ridden. Synchi also called ATAG, at SAIs or private coach and often asked him to be a coach horse.

It should be noted that each synchy owned their professional secrets. He could tell at a glance the potential of the horse to determine what he is terrain — mountain or plain, and for any distance — short or long — is born. But knowing the pedigree,

The history of the Kazakhs has preserved the names of many famous Sensi is Kiikbai, Kurenai, Tranby, Sincerly Shokai and others.

Synchy authority was unquestioned, and there are many confirmation in folk art.

The power of the authority

Thus, in the epos “Kobylandy Batyr” is mentioned about how the role synchy made Hartka, the wife of a warrior. Six years she prepared the horse for her husband.

Once Karaman, a friend and contemporary of Kobylandy, called it camping. The warrior accepted the offer. Then the herdsman Elemis asked Hartco ready horse? Kurtka replied:

“Say Hello to my Sultan. Lay off the campaign. The horse will be ready only forty-three days.”

Elemis conveyed Kobylandy Batyr. He went to a friend and said:

No offense, dear friend,
But not at the time of the campaign,
I can’t leave so suddenly.

You greetings from my wife.
My same age, I cherish your friendship,
Please understand me, my friend.

There are a lot of mountains and slopes, my friend,
She fed it from an early age.
Bracelets white hand ringing,
Only she was riding the horse
As the mother loved, was patient.

She is among the women, you know, smart.
Tulpar born brown filly,
Forty-three days is not enough, she said.

School of the Kazakh synchy has its own history. Scientist Zhangar Dadebai in his book “Tlarda sons me baby” (Feature horses and their training) refers to the famous Sensy. For example, the author quotes the words of sinsy Kureba:

You take the foal as the foal,
Three years do not regret, it and even kill.
Let four-year-old horse,
Five-year bet on horse racing,
If not the first, you cut the head off mine.

About skill famous synchy and folded a lot of legends.

“Once in Akbastau, in semirech’e, was held as (the funeral feast) in honor of Kazybek. The people who gathered to participate in horse competitions, decided to show their horses to the experts.

“Sorry, but your horse has lost strength after grazing on the local grasses. If fed with grass and water of his native land, would be the first at the races. Nothing can be done, at this time, the horse will be satisfied with only the fourth place.” Indeed, he took fourth place, as said sinsy”.

It was believed that a huge role in the training of horses is playing the terrain and the grass on which they feed. Because each region has its own characteristics.

“In this regard, jump on the holidays, aces and weddings started without delay, immediately upon arrival of the horses,” writes scholar Totybai.

In the book “Abai Turala Estelar” (Memories about Abai) Niyazbek Allakuli, a descendant of the younger brother Uscherba, the great grandfather of the poet Abai, wrote synchy Tarpana:

“Tranby knew very well how horses and birds. One day he came to the pastures, where there was a big one. The audience knew that Tranby was known synchy, and held before him the horses of the participants in racing.

Looking at them, sinchy said: “the First to cmbe (finish) comes like this ccbst (dark gray)”.

After this came the Abai with two horses. Hello, Tranby indicated red red horse and said, “First came this, ccbst will be the second“.

Everything happened as predicted Sensy. First came the red, the red horse, ccbst followed. The second horse Abaya was only the fifth, and no one paid attention.

After the race Abay invited Tarpana to their village. And when accompanied the guest asked about the horse that came in fifth:

You’re a good sinsi, tell me, is there really a horse that Akaska?

Tranby carefully examined the horse from all sides and rendered a verdict.

— If he is well train, he will be a real Tulpary.

Abai called one of the horsemen and ordered:

— Put the bridle on Akaska, now he belongs to Taransay.

The first does not mean best

Tranby loved horses and knew a lot about them. Returning home, he became involved with the horse, watching him day and night. He even stopped to sleep in the house. And after a while took him to the races in honor of Toya, which was held in the parish Kyzyladyr.

Akaska came to the finish line first. Then synchi asked the boy-rider to tell you how behaved horse. He replied that he took the lead, when cube (finish) was quite close. Then Tranby said that it is necessary else to do until he is ready.

After a while he took the horse to the new horse race. Akaska again came in first, and sinsy again asked the boy, how did the horse. At this time, the rider answered that Akaska immediately took the lead. Then Tranby satisfaction said: “now he has become a real roller,””.