With these words aytysker, poet and songwriter , Rinat Zaitov yesterday appealed to its readers on the personal page in Instagram.

In his post, the poet recognizes that once was wrong, calling the Dimash Kudaibergen a victim of Chinese policies.

We will remind, in the beginning of year in interview to the program TalkLike Zaitov suggested that the Chinese use the Dimash Kudaibergen against the Kazakhs.

Who worked on today’s way Dimash? What nation? China! They use the talent of our singer against us

I knew it will be so”

said aytysker in an interview.

Do not touch the Dimash! colleagues protect the singer from accusations of the promotion of China’s interests

But yesterday, a poet posted a recording of the song performed on the lute, where the praises of the singer Dimash Kudaibergen, and says if he won’t admit to it, let his mouth be closed forever.

“I know what will be talk after this my record. But any action is to obtain a real assessment. This is my principle. If so, it’s my mouth that was screaming that Dimash was the victim of Chinese policy, will not be able to scream “Hurray” when the lute sounds on top of America, it’s better closed.

Dimash went down in history. It is a fact. Well done! Be it so!”

— the poet wrote and dedicated a verse to the young singer, which reads in part, “…those who raised the lute, must never fall from the top of history.” 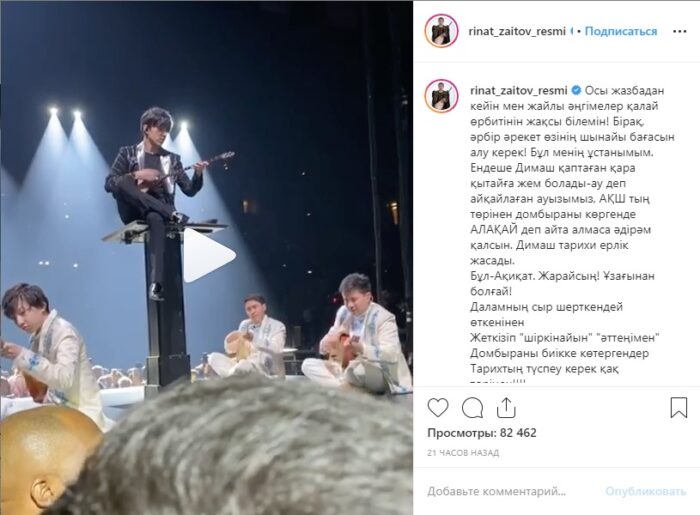 However, Network users disliked this recognition. Some considered his record of duplicity and expressed the opinion that Zaitov a great actor and deserves an Oscar. Others have supported and thanked the poet for sincerity.