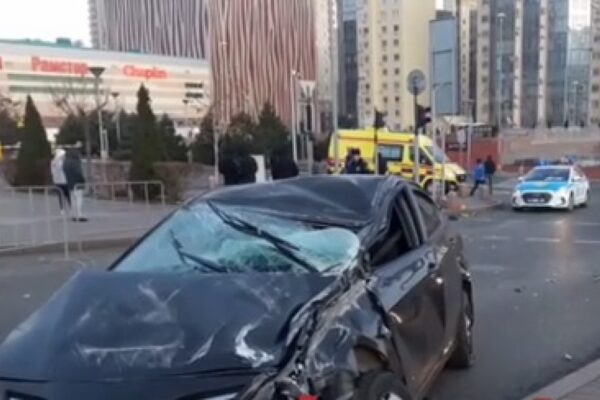 Resonant accidents occurred in Almaty on November 17 at 6 am. The first reports said that the girl drove drunk, fell asleep on the move, left the pavement and knocked down Sergey stephanov.

Who could have known that these facts later disappear in court?

January 10, the judge of Bostandyk district court Aray she showed remarkable humanity, and sentenced the culprit of the accident to probation and loss of driving privileges for 3 years.

We have carefully studied the verdict. And was surprised — it is mentioned several times about the positive characteristics of the convicted Saifulina. But

there are no data on the inspection of the culprit of accidents on the degree of intoxication. The text just States that it was easy

Sarin itself at the trial said that on the evening in a friend’s house drank a glass of wine and went to bed. And at 6 am went to the aid of the mother, who became ill with heart. Exactly glass? How many ppm examination showed that the culprit of the accident was clearly not 5 minutes after the tragedy?

Deadly accident in Almaty: how the defendant was able to mitigate the sentence

part 3 of article 345 does not provide for a conditional sentence. Deprivation of liberty for a term up to 5 years

Sober give a time frame

— Bolat, is a regulatory decision of the Supreme court, where indicated, in which cases and which articles of the Criminal code applied to a fatal accident, perfect drunk. Why is the girl not charged with 346 article that just about drunkenness?

— It says that the owner of the vehicle that committed the fatal accident, can be used as article 345 and 346 th.

And there are clear requirements for their application. 346 section applies when driving in a state of intoxication of another person, and the owner is nearby. In this case, the owner applies 345 the article, and in relation to the driver and 345, and 346.

But 345 article does not provide for a suspended sentence. So as the judge did?

— If the court finds extenuating circumstances, may impose a penalty and below the lower limit.

A bit of judicial practice.

In 2019, resident of Mangystau region was sentenced to two years in prison for the fatal accident. He was sober

and has committed a fatal pedestrian accident by negligence. The relatives forgave the driver and asked not to punish him by imprisonment. Nevertheless, the court gave him a real term.

— What’s the verdict Zarine Saifulina not, in your opinion?

Yes, relatives forgave her, but that is no reason to give the culprit of the accident probation. Since there is an aggravating circumstance

You can refer to the judicial practice of recent years and not find in it the suspended sentence for fatal accident by negligence, committed by even sober drivers. And there was drunkenness!

In Soviet times, the drunk driver was already considered a criminal. Since he deliberately violates the rules of the road.

— Originally said that she fell asleep at the wheel due to intoxication. In the sentence there is no medical evidence — how many ppm was in the blood of the culprit of the accident. So it is possible?

— This information needs to be specified, and I am surprised why this examination in the judgment does not appear.

— May be this information is deliberately missing, and the driver was in easy degree of intoxication, and heavier? After all, with such information to give a suspended sentence would be even more problematic.

— I can’t comment on the actions of the court, it is not in my powers. The courts are independent. Nevertheless, certain ideas I have.

In principle, the degree of intoxication does not affect the sentence, even though in the decisions in administrative cases the number of ppm is always specified. What happened with our discussion sentence, I don’t know. On the other hand, the presence of alcohol in the blood is already an aggravating circumstance.

— Do you think the prosecution appeal this sentence?

— While the official response to the Prosecutor’s office did not give. And, as I understand it, the Prosecutor involved in the case, agreed with the opinion of the court. So I don’t know what will happen next.