The first official meeting of feminists in Kazakhstan, took place without incident. 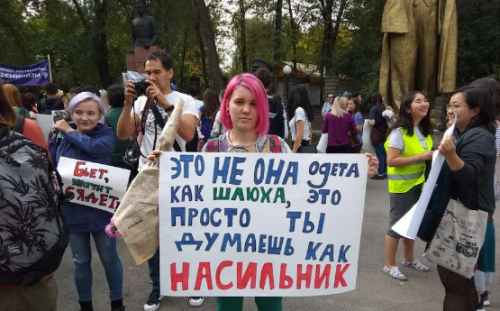 The rally, held September 28, 2019, is notable for the fact that it was first able to hold formally in coordination with the city authorities.

The result of the meeting was the resolution demanding that the government pay more attention to sexual violence against women, including both household and violence in prisons.

Posters with appropriate slogans can be seen directly in the hands of the protesters. Here are a few examples.

There were also slogans on abortion, menstruation and bride theft.

Ready for what society?

— It was reported in the media, no accident happened, the participants outlined their agenda. And feedback about the meeting mostly positive, says the analyst.

And if earlier, according to the observations of some experts, the previous performances of feminists did not reflect the actual problems at this time, according to Shibutov,

— By the way, in the previous rallies were attended by people with rainbow flags, and this aroused the anger of some citizens. This time it came from a feminist purple, so the rating at the last rally a small. Our society is not yet ready for presentations related to LGBT topics, said Marat Shibutov.

Importantly, according to the analyst, the fact remains that the government finally decided to encourage moderate political activity.

further rallies and pickets will be much more

This is a General promotion aimed at enhancing the activity of civil society in Kazakhstan, — he said.

The proposals of the feminists

According to Zulfiya Baisakova, Chairman of the Board of oyul “Union of crisis centers of Kazakhstan”, the feminists have very correctly noted that sexual crimes against women need not only to increase the punishment, but also to develop the infrastructure for women’s rights.

She, of course, will give the duty, but he’s not interested in helping and will be “for show” one or two meetings, ‘ she says.

Baisakova thinks it is wrong that today in Kazakhstan

among the entire list of violent acts against women, it is an offence only rape

and the rest applies to offenses involving only administrative penalties. 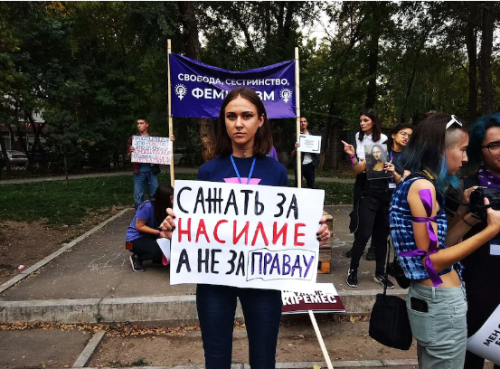 — We have had decriminalization of violence. The household is treated as a misdemeanor, however, must be transferred to the criminal code, it is a crime against the person. In addition, today’s feminists want to draw attention to the fact that

violence against women in closed institutions should be regarded as torture

Remember, for example, Natalia Kakiseni. There the guilty were punished, but it happened because of public outcry. Equating violence in prisons for torture, the punishment will be more severe, — stressed the Chairman of the Board of oyul “Union of crisis centers of Kazakhstan”.

The deputies are inactive

— The desire we share: to the women in our country live without violence. So now is the unification of the forces interested in changing positions in the field of protection of women’s rights. And this is a very good trend.

And members now need to meet with the leaders of women’s organizations. No need for round tables and inspirational meetings: you just have to routinely discuss the proposals and to develop a common strategy. Today

MPs are now present and former prosecutors, and former members of law enforcement — they should work. Moreover, there are women. But to me personally none of the women deputies did not call. A feeling that no female solidarity, says Baysakova.

In her opinion, permission to hold a feminist rally — this is great progress. But at the same time, every picket must be justified motives, but also constructive proposals, what needs to change for the better.