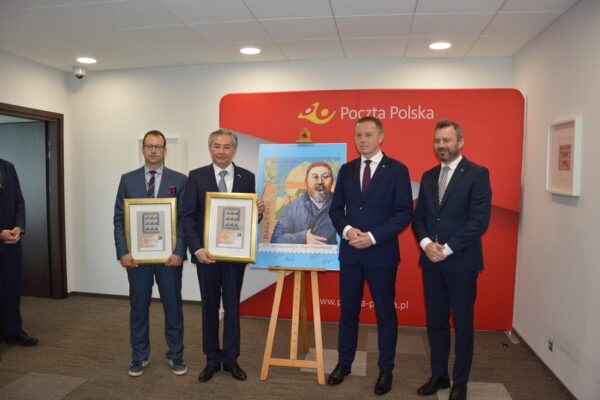 In the Central building of the “Mail Polish” solemn ceremony of stamp cancellation, dedicated to the 175th anniversary of Abai Kunanbaiuly, the press service of MFA RK.

The project for the production of the brand was implemented JSC “Mail Polish” on the initiative of the Embassy of Kazakhstan in Warsaw in celebration of the anniversary of the great Kazakh poet.

During the opening speech the Ambassador of Kazakhstan in Poland Alim kirabaev noted the relevance of philosophical ideas and immortal literary heritage of the great writer, in which he encourages and inspires the current generation to be guided by the principles of fairness and justice and to serve his people and seek enlightenment.

Accentuating the fruitful and longstanding cooperation between the two countries in the field of philately, the Chairman of JSC “Mail Polish” Tomasz Szikora expressed the hope that the postage stamp with the image of the great Kazakh educator will arouse keen interest among philatelists and is a testimony to mutual of successful joint projects.

During the celebration the Director of the Department of the Ministry of foreign Affairs J. Hofmokl, indicating the importance and magnitude of Abay’s creative heritage, recommended to see with his famous literary work “Kara szdir,” which quoted Pope John Paul II during his visit to Kazakhstan in 2001.

Overall, this event, held in celebration of the 175th anniversary of Abay, presented a good opportunity to acquaint the Polish audience with the cultural heritage and spiritual wealth of Kazakhstan people.

In the event, along with representatives of the Embassy of Kazakhstan to Poland, was attended by management of JSC “Mail Polska” and the Ministry of foreign Affairs of Poland.

At the end of the meeting the Ambassador handed over to Poland a few books of Abai “Kara ssdir” in Polish.