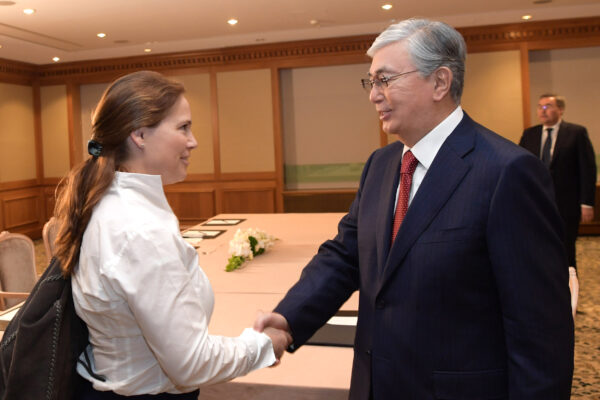 During the meeting with the Chairman of the Supervisory Board of CLAAS Group Katrina Klaas-Mulhauser discussed the implementation of joint investment projects. CLAAS Group, presented in Kazakhstan, distribution network CT Agro, which sells agricultural equipment and provides its service, reports the press service of Akorda.

“Our strategy is to diversify the investments that come from many countries.

We want to make Germany the main strategic partner from the point of view of investment”,

said the President of Kazakhstan.

Klaas-Mulhauser expressed satisfaction with the fact that

“The talks with Chancellor Angela Merkel and President Frank-Walter Steinmeier took place at a high level. I’m sure they will give a new impetus to bilateral cooperation”, —

said the head of state.

Tokayev German businessmen: “We want to positively solve all questions”

Bruch said his company in 2013 on the basis of JSC “Arcelor Mittal Temirtau” was launched production of technical gas by investing in the project is about 95 million euros.

“Today, “Linde AG” implements the second phase of the project and intends to invest another 80 million euros,” —

The prospects of mutual cooperation were discussed at the meeting with the CEO of the Schaeffler Group Klaus Rosenfeld. The head of the firm, specializing in the production of components for the automotive industry and space exploration, said the President of Kazakhstan about production and investment opportunities.

on a public-private partnership. The firm intends to establish with Kazakhstan long-term cooperation, which will enhance the industrial potential of our country.