Erlan Turgumbaev said about the fight against corruption. 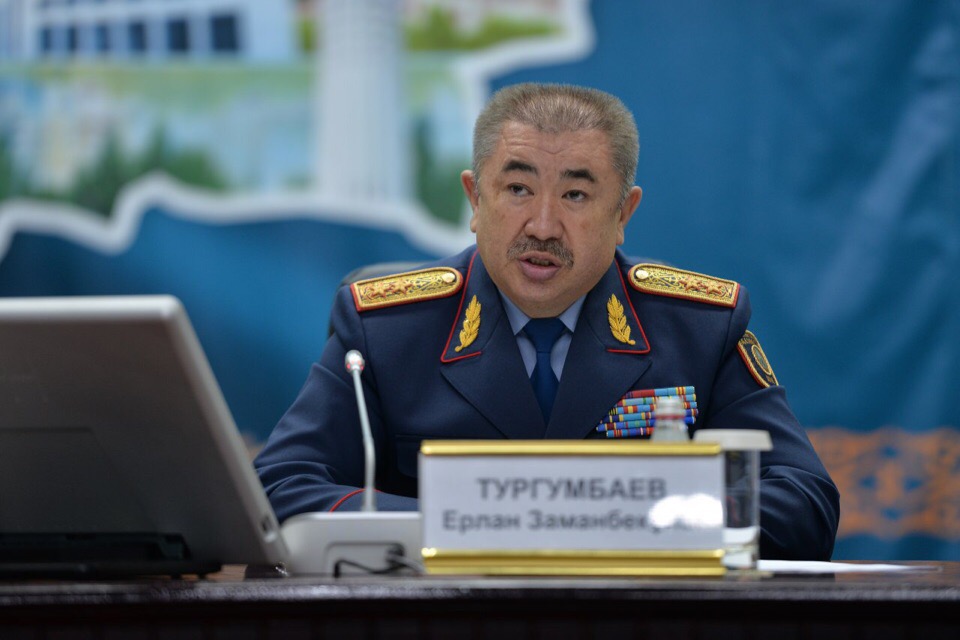 “We all serve the people. The patience of our citizens has been exhausted. Time persuasion and debate is over”, — said Erlan Turgumbayev said, starting the report on combating corruption in the ranks of the interior Ministry.

On 3 October this year in a joint operation conducted by national security agencies and internal security Department of the Ministry of interior, exposed senior officials of the police Department of Akmola region, has long engaged in illegal activities, reports the press service of MIA of RK.

Deputy head of Department detained in relation to other persons elected to other measures of restraint. The detention of senior police officers – not the first operation, conducted jointly with the national security agencies and anti-corruption service.

It is the result of a consistent policy of the Ministry of anti-corruption, and other violations of the law in their own ranks and transparency of this work.

Thus, during the joint action for 8 months of current year in respect of employees started 307 of pre-trial investigations, including 170 – for corruption offences. Prosecuted 74 of the head different level, 52 of them for corruption.

Employees are held accountable for fraud, bribery, abuse of authority, falsification of evidence and other crimes.

Critical to this work is the personal responsibility of managers not taking proper preventive measures.

For example, head of Department of criminal-Executive system in Kyzylorda region dismissed in connection with the arrest for corruption crimes his Deputy.

Also for corruption crimes of the leaders of the supervised units lost posts of Deputy chiefs of police departments of Atyrau and Zhambyl regions.

At least as stringent measures are taken against leaders who violate ethical standards of behavior. In the Kostanay region, one of the Deputy chief of the police Department dismissed on negative motives for being in the service in a drunken state, the other dismissed for insulting a subordinate.

Currently been in a number of regions on the subject of corruption schemes, including those associated with personnel issues, public procurement, etc.

At a meeting in April of this year the Board of the interior Ministry with the participation of head of state the Minister of internal Affairs Yerlan Turgumbaev determined, uncompromising struggle against corruption as one of the work priorities and key conditions for successful reform of the internal Affairs bodies.

“We all serve the people. The patience of our citizens has been exhausted. Time persuasion and debate over. In the police there is no place for those who abuse trust and power. There is no place for those who disgrace the honor of the uniform. I demand from everyone — from private to General of fair service for the good of his people!” Yerlan Turgumbayev said during the past in September this year selector meeting with participation of heads of territorial departments of police, emergency and correctional system.

Such tasks are set for the new management of own security services, and staffing. One of the innovations of personnel work became mandatory interviews of candidates for Executive positions on the Personnel Committee of the interior Ministry, which corresponds to the principles of meritocracy and competition. Moreover, we consider all candidates who are in reserve, to ensure the adversarial process and determine the best match.

Head of Department of private security has significant experience in operational and analytical work in the national security agencies, including the detection of corrupt practices and “dishonest” staff.
The principal novelty of the work of private security – the reliance on civil society.

For these purposes, signed a tripartite joint plan on combating corruption in the bodies of internal Affairs between the interior Ministry, Agency for anti-corruption and civil institutions.

The implementation of the plan reviewed 5 September with the participation of interested state bodies, NGOs and the media.

“The fight against corruption in bodies of internal Affairs will be compromised. Therefore, I urge citizens not to remain outside and inform the interior Ministry about all the facts of corruption offenses committed by our employees. In each case, appropriate measures will be taken”, — said Erlan Turgumbayev said.

Information about offences committed by employees of internal Affairs bodies can offer to visit the blog on the portal https://dialog.egov.kz or by calling the Department of own safety of the Ministry (helpline: 1402) or sending a message to personal page “Facebook” and “Instagram” head to the DRC. Anonymity is guaranteed.