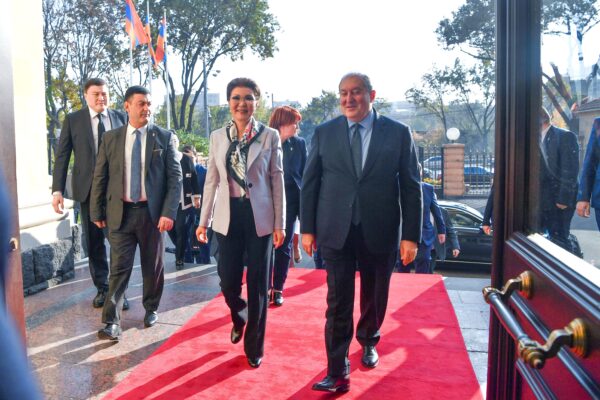 Dariga Nazarbayeva and Armen Sargsyan agreed on new promising areas of cooperation between the two countries, the press service of the Senate.

During the meeting the interlocutors touched upon the cooperation issues in such spheres as tourism, information technology, transport and logistical capacity, etc.

The speaker of the Senate invited the Armenian businessmen to work an International financial centre “Astana” and the international Technopark IT-startups “Astana Hub”, focusing on the opportunities offered to entrepreneurs and investors of the EAEC to enter the markets of China and Southeast Asia.

In turn, the President Armen Sargsyan supported the proposal of the speaker of the Senate to expand cooperation between entrepreneurs of the two countries, added that today Kazakhstan and Armenia does not fully use the existing potential for cooperation. According to the President, have the opportunity to give an impetus at least in several areas of partnership. It’s food safety, financial management and joint cultural events.

The parties agreed to establish joint working groups on prospective areas of cooperation between Kazakhstan and Armenia.

Earlier in the framework of the official visit to Armenia the Chairman of the Senate Dariga Nazarbayeva together with the spouse of the Prime Minister of Armenia Anna Hakobyan visited the Center of pediatric Oncology and Hematology in Yerevan.