the birthday of the capital in the village of Shamalgan, Karasai district opened a Central Park for kids “Ana-Nury”, built with the support of akim of the region Amandyk Batalov to the funds allocated from the regional budget.

In the solemn ceremony of its opening was attended by the mayor of the district Zhandarbek Dalabaev. Warmly congratulated with this event and resident of the village of Shamalgan, a veteran sports entrepreneur Serik Bakishev.

The Park’s area is half hectare, and length – 380 meters. At the same time he can enjoy 100-150 people. It is symbolic that the Park is located on the embankment of the river Shamalgan.

Its construction led LLP “RETAs-Kurylys II”, whose team is headed by the Deputy of the regional maslikhat Alibek Sarsenov. Work began in April 2019, and here it is the long-awaited opening.

In the Park designed two children’s areas with play structures, a fenced Playground for playing football, volleyball and basketball. Next to her is equipped with tables for playing table tennis, chess and togyzkumalak. By the way, could not resist and played a game of table tennis and Zhandarbek Yermekovich.

It should be a teaching moment. Here grow different flowers, trees and shrubs, designed lawns, benches and urns, and one side decorated stands, which tells of the Kazakh khans, national judges, batyrs, and presents statements of Suyunbai Aronuly, Abay Kunanbayev, Zhambyl Zhabayev.

According to akim of the rural district of Shamahanskaja Erase Toktasynov in subsequent years it is planned to expand the Park by another 250 metres, bringing it to main street.

This Park has become a good gift for 20 thousand semelhantes. As noted by the resident of the village of Shamalgan, retired akylbay Karavaev, before there was scary to walk, especially in rainy weather. Interfere with slush, mud and off-road. Now this is one of the most beautiful places of the village. He said, and the proactive stance of a young mayor, with the advent of which deal with many socially important problems, including the construction of a children’s Park, which particularly enjoys the kids. 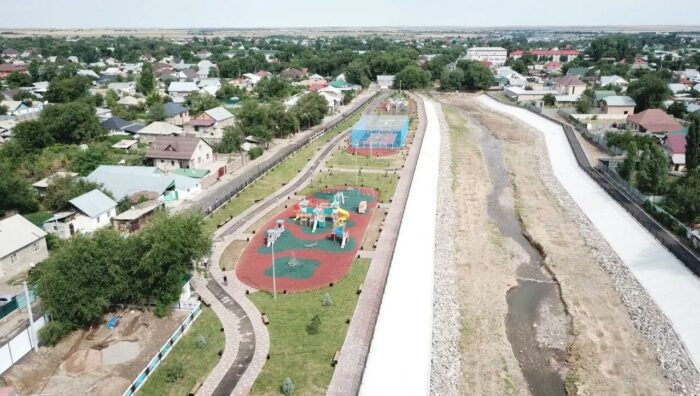