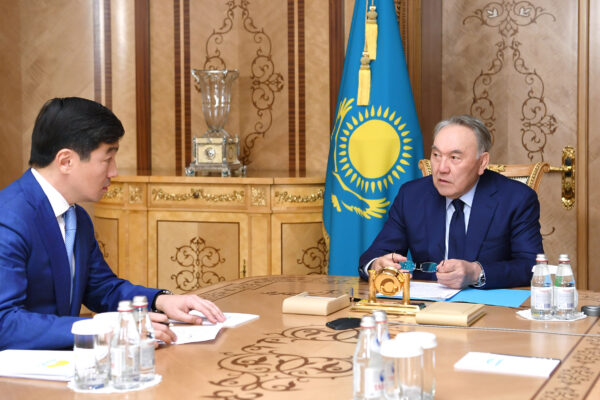 The first President of Kazakhstan held a working meeting with first Deputy Chairman of the party “Nur Otan” Bauyrzhan Baibek, the website elbasy.kz.

During the meeting, Nursultan Nazarbayev was informed about the current activities of the Fund “Birgemiz” and the preparation for the holding of intra-party selection – primaries.

So, according to the information, from the Fund “Birgemiz” lump-sum payment in the amount of 50 thousand tenge was received by more than 360 thousand families, 240 thousand families were delivered food baskets. In addition, a lump sum payment was issued more than 2,100 employees of medical institutions of the capital and Almaty.

From the Fund “Birgemiz” was allocated 340 million tenge for the construction of houses for the inhabitants of the village Dostyk Maktaaral district. In addition, activists and volunteers of the party have collected and sent over one thousand tons of humanitarian aid to residents of affected communities.

Noting the importance of the work undertaken, the head of State instructed to continue support of the needy residents of small towns and villages of the country through the Fund “Birgemiz”.

– “During a state of emergency “Jas Otan” has mobilized more than five thousand volunteers across the country. He worked seven days a week, the address was delivered to help the needy. I am glad that a new generation of true patriots and responsible young leaders. I signed thank you letters to the most active of them”, — said Nursultan Nazarbayev.

The first President of Kazakhstan instructed to continue work to strengthen public confidence in the party.

— “Nur Otan” is a party of real Affairs. I see that the number of calls to the public reception has increased seven-fold, and the number of resolved issues is growing. It speaks to the credibility of the party. This work should be strengthened,” — said the head of State.

During the meeting B. Baibek reported to the President on the results of the working trips to the regions of the country, the implementation of the election program of the party and preparations for primaries.

– “Currently form the personnel reserve of 10 thousand party members. The rules of the primaries approved subject to quotas for women and youth. Intra-party selection is planned for the second half of this year, – said the first Deputy Chairman of the party “Nur Otan”.