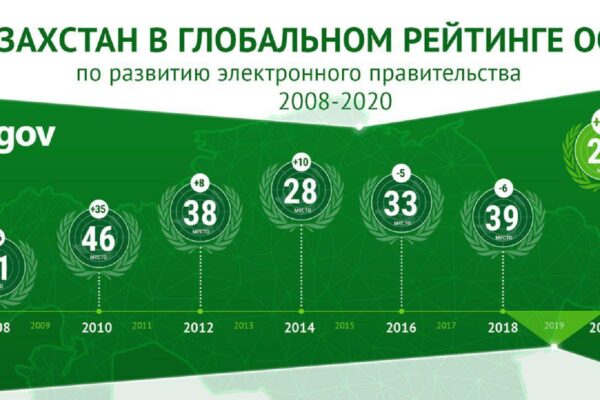 In the global ranking of e-government development, which forms the UN, Kazakhstan has risen to 29th place, followed by Canada, the press service of MCAAP RK.

This rating is made every 2 years and it assesses the 193 member countries of the UN. When compiling the current rating (2020) estimated the work done by the States in 2018 or 2019.

According to the published UN report, the top three leaders in the development of e-government includes Denmark, South Korea and Estonia, which is located on the 1, 2 and 3 positions, respectively.

Compared to 2018 index of e-government development (EGDI) increased by 10.2% in the year 2020, the number of online services by 6.38%, human capital by 5.6%. The greatest growth is noted for the development of telecommunications infrastructure — 22.7%, meanwhile, the level of e-services Kazakhstan has received almost the maximum score – 1 of about 0.92.

The level of development of e-participation (E-participation) Kazakhstan moved up 16 positions, finishing in 26th place. Index of e-participation shows involvement of citizens in the decision-making process, transparency and openness of activities of state, which corresponds to the country’s politics, “he that heareth state.”