So, specialists of the interior Ministry in the course of monitoring of social networks revealed publications containing video footage in which the aircraft dropping the substance red over desert terrain. The authors of these publications argue that the footage shot in Kazakhstan.

The investigative Department of the Ministry of interior for spreading false information initiated pre-trial investigation under article 274 of the Criminal code of the RK.

The Ministry of the interior investigated the full version of the video, which showed that the plane in the video is “Tanker Air Carrier 914” involved in extinguishing fires in the United States. Video copied from the Twitter account of the company AZ State Forestry. 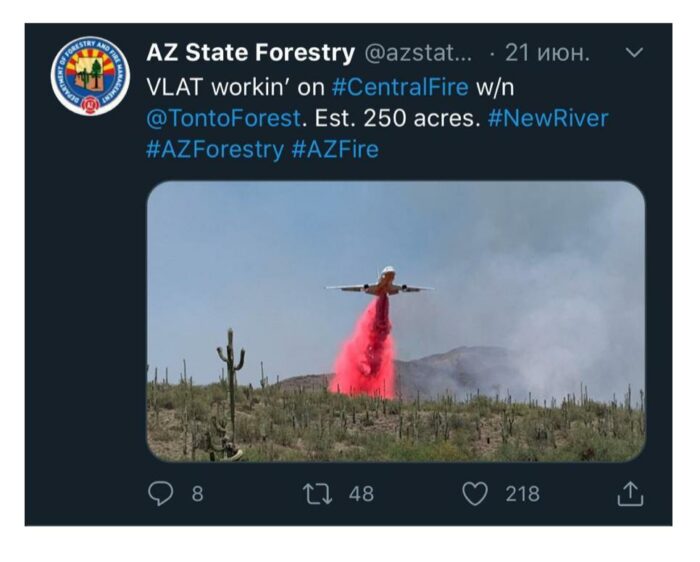 As told the experts of the Committee for emergency situations of the Ministry of internal Affairs, the practice of fighting fires colored water is used in the US and Australia. Paint helps the crew to see the result of the previous drop and to take a better shot when re-entering. Also in the composition of this water is a special fertilizer which is absorbed into the wood and retards the spread of fire. The crews of the firefighting aircraft have to fly at extremely low altitudes – 60-100 feet above the tops of the trees. It often happens that the water drop not on the fire, and irrigated areas in the path of the advancing line of fire.

Footage of fire-fighting issued by the cyber criminals as it has done in Kazakhstan, taken while fighting fires in June of this year in one of the States of the United States. This is evidenced by the markings on the aircraft, license plates on the vehicles of the fire service (Fire AZ-TNF – Tonto National Forest – a national Park Tonto) and the English speech of fire that can be seen in the full version of the video.