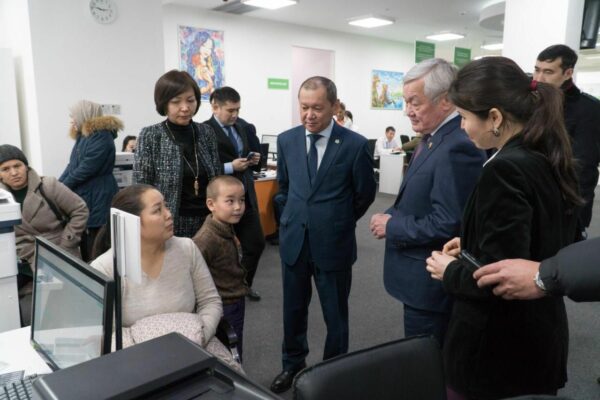 First Deputy Prime Minister and head of the Ministry visited the capital’s centre of family support “Jana”, where the principle of “one window” is over 70 types of services. After that, they got acquainted with the work and employment Department of employment of the population of the district akimats of the capital, where residents of Nur-Sultan may also apply to the appointment of the TSA.

“You need accessible and understandable to explain to citizens the rules of the ASP purpose and benefits to large families, to create the most favorable conditions. If people have any further questions, it is necessary to involve experts from other state authorities and to resolve these problems. No hype should not be”, – instructed Saparbayev.

The staff of the center “Jana”, CZN and Department of employment reported that work on reception of documents is carried out in a regular mode. The excitement of the population there.

According to local authorities, in employment in other regions of the country to date have not been a large influx of citizens wishing to register ASP.

“Kazakhstan citizens applying for the appointment of the ASP, do not worry that they will not be able to apply and create the queue in the employment centers immediately after the holidays. At the end of last year in all regions of the country in advance payments have been made ASP in December, which the citizens were to receive in January. Now, during this month, people can easily apply. All who fall under the criteria for the appointment of ASP will receive payment for January in February,” said Birzhan Nurymbetov.

Recall from 1 January 2020, Kazakhstan introduced new approaches for the provision of ASP, which include: the quarterly appointment of targeted social assistance; the preservation of the previously existing threshold criteria for the assignment of ASP – average income on each member of the family should be less than 70% of the subsistence minimum; determination of the size of the ASP for all members of the family as the difference between average income and the poverty line; an increase in the time of the survey financial situation of the family from 3 to 7 days, with the strengthening of the role of election commissions in the process.

In addition, children from families receiving TSA, will be given a guaranteed social package.

For example, children from low-income families at the age from 1 year to 6 years will provide food packages and hygiene supplies, ranging in age from 6 to 18 years old – hot meals in schools, school supplies and school clothes, as they will be reimbursed the cost of travel to school. Medical care, including dental, children under 18 years of age will be provided within the guaranteed volume of free medical care and mandatory social health insurance.