In the next semi-annual rating of akims of oblasts and cities of Republican significance, the former leaders flew to the end of the table. In General

Rating based on expert assessments made up OF “Strategy”.

Evaluated on the following criteria:

Satisfactory not so good

In the first half of 2020 evaluation governors declined from 2019. Experts evaluated the work of all below average. 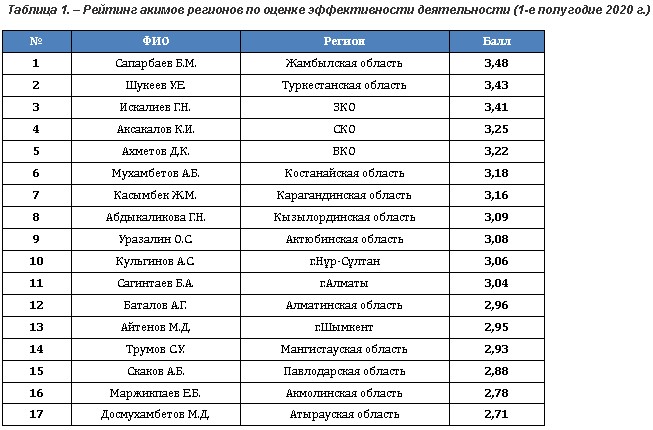 Nevertheless, against this background, there are leaders and outsiders.

However, in the management of the situation by experts sounded and claims:

“does not solve inter-ethnic problems, not learning from the pogroms in Kordai, but on the contrary, even made them worse”.

— At the same time experts doubt prospects of the head of the region and note that “he has developed all their Luggage,” added the authors.

Second place was taken by the Governor of the Turkestan region Umirzak Shukeyev (3.43 points).

He also received relatively high levels in managing the political situation (2nd place; 3.58 points) and satisfaction with the work of the population (2nd place; 3.42 points). However, few experts believe in its prospects, as “this “bison” was expecting more, but to no avail”.

For the first place it took not so much

Significantly improved position in the rating of the akim of West Kazakhstan region Gali Iskaliev (from 8 to 3; 3.41 points).

— Progress was primarily due to the very high rate of “information openness” (1st place) and a high enough index of “prospects” (3rd place) — said the authors of the rating.

Significantly improved the rating of the akim SKO Kumar Aksakalov, rising from 11th to 4th place (score 3.25). The experts agreed that it is the most promising regional Manager, by giving him according to this criterion the first place. However

this was enough to score 3.5 points, the other results were even worse

Akim of East Kazakhstan region Danial Akhmetov has also risen — from 7 to 5 place (3.22 points). However, some respondents noted that in “too many problems and scandals”.

Became Governor of Kyzylorda region in the end of March 2020 Gulshara Abdykalikova nevertheless occupied a relatively high 8-th line. Experts expect that it “will be able to show good results”. But lamented the lack of information in the national media.

Experts commented the decision as follows:

That is 600-700 thousand people in Almaty region fed by the Almaty. Jobs in the region created low and they are mostly seasonal”;

The number of people (almost all the working population), asked for assistance from the state during the period of quarantine, exceeded all norms

This indicates the highest level of unemployment and extremely low incomes. Fertile land withdrawn from circulation through the sale and illegal corruption.”

“Because of the age of prospects on future career misty.” 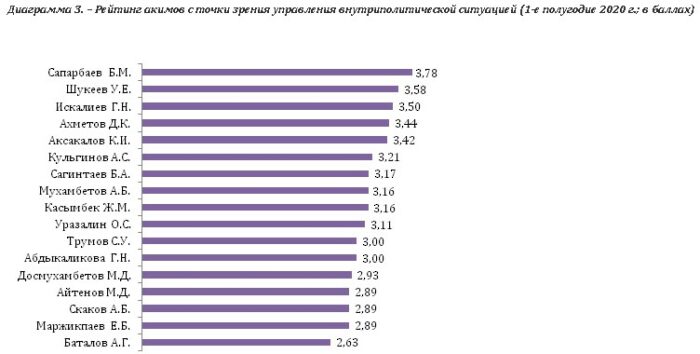 — According to experts, the Governor of the financial and cultural center not very strong and long adapts to his new position — sociologists.

The governors of Altai Kulginov (10th place), Serik Trunov (14) in the first half of 2020 has preserved its position in the ranking. Even though we lost a few points.