This seemingly harmless tweet known in the circles of investment adviser Tom Luongo caused a serious debate in the American business press.

It got to the point that the issue of investment in Russia, CNN has devoted an entire program with the involvement of eminent experts. The vast majority of them responded negatively even about the idea to invest in Russia. The author of the tweet called almost Kremlin spy.

Sam Luongo refused, as he said, “to waste time on part in the farce.” But in his blog posted the material in which he explained his tweet.

“I respect the opinion of everyone in the business no doubt is an expert, has written Luongo.

However, I should note that if we discard emotions, all the arguments “against” are reduced only to three things.

The first — in Russia it is impossible to invest because it is the aggressor.

The second — to Russia not to invest, because that’s where the Putin regime.

Third — a little more, and Russia will suffocate under sanctions.

Here there is a clear politicization. However, investment is not like politics, they like facts. So let’s say from this point of view.”

The Central principle of U.S. foreign policy — regardless of where the countries that we are the main. All the rest are subordinate.

Russia under Putin is not playing this game for twenty years. I don’t want to say that Putin is a good man or a good leader. No. But tracking the activities of Putin for the past seven years, I came to one inescapable conclusion.

Yes, now about Russia misleading a lot of negativity. But the markets have not traded on fundamentals daily. The fundamental nature need to be considered in the long term. And I declare with all responsibility that for long-term investment, Russia today is the best tool.

In 2014, oil prices collapsed as the share price “Gazprom”. For the ruble crisis, artificially created by the United States and Europe. The goal is clear — to remove Putin from power in retaliation for the fact that the Crimea did not get the United States.

However, what Russia has done? She bought a very large stakes in their companies when their price was at multi-year lows. Look at the value of these shares now and count yourself how much earned Russia.

The last five years, the United States and Europe what are the only barriers are not put in front of Russia in the market of global capital. The same law Magnitsky was used as a bludgeon to scare off investors from the land of the evil Putin.

A clear provocation for war in Syria, Ukraine and the UK slowed down the pace of investments to the Russian markets. “Gazprom” for years languished due to political risks in connection with the US pressure in Europe. It also attempts to stop first, “South stream”, and then “Nord stream-2”.

Frivolous claims from Ukraine, the EU and the Baltic States pursued Gazprom all these years. The EU changed their laws to retroactively try to get legal control over the price of Gazprom’s natural gas.

But in the end none of it worked.

Slowly but surely, the Russian economy and the improving political situation in the hearts of investors seeking yield in a world without income.

An article in Forbes last week perfectly illustrates this shift in sentiment.

“They made themselves bulletproof”

says James Barrino, co-chair of the Department for debt of developing countries for Investment Schroders in new York.

“They can repay all its foreign debts with their reserves at the Central Bank. In addition, they reduce interest rates. Currency is very stable. And they have the opportunity on a budgetary basis to spend on its economy, without external borrowing”.

About the ratings and the lessons of survival

In 2015, Russia’s economic performance was at a good level. However, the rating agencies, like obedient servants, cut Russian rating to junk status.

And they did it against core principles, such as sufficient money to repay the debt burden of the entire country, both public and private. While the ratio debt/GDP in Russia reached 13.3% . Let’s see how much the ratio is now in countries with excellent ratings?

Here, experts say, the United States almost ousted Russia from the markets of dollar financing. But what do we actually see?

The only step that was not taken against Russia, the removal from the system of interbank SWIFT messages.

But again nothing worked. Trump only accelerated the process of teaching Russian to work without the dollar.

It is possible that Russia, China and Iran in 2020 there will be an alternative to SWIFT. And as soon as transactions of these countries will leave SWIFT, the US will lose a very powerful monitoring tool.

Instead of trying to isolate Russia financially and destroy the ruble, the United States raised the reputation of the ruble in Asia.

It happened due to the political stability created by Putin and his diplomatic corps headed by foreign Minister Sergei Lavrov. Putin has always tried to keep their promises on the world stage, how complex were the relations between the two countries.

Trump also unilaterally, bullied and sanctioned most of the world because the world is not doing what the President of America. That is, in fact, we are seeing

Trump destroys the long-term viability of the dollar

Russia also encourages the trade, and is complying with their contracts and supports allies. Let’s look at this fact.

Since trump has imposed political sanctions by the world economy, the ruble in international markets is broken. Despite a slight strengthening against the dollar (0.8 percent), the ruble grew by 11% compared to the overall basket of its trading partners (REER). 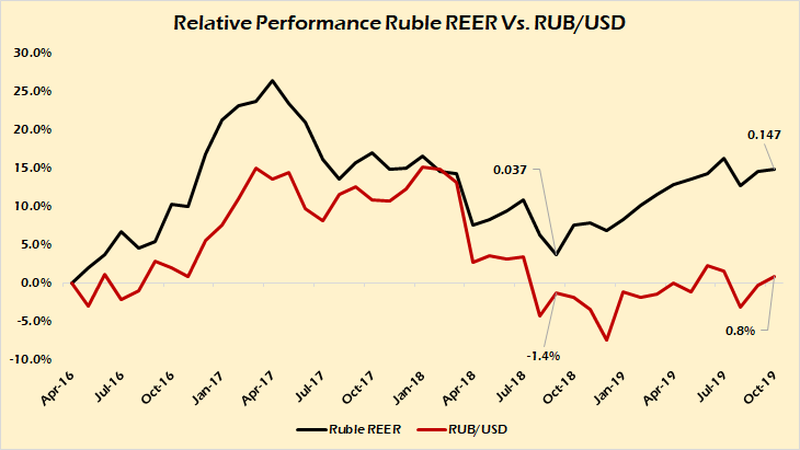 This clearly shows that right now Russia’s trade has nothing to do with the dollar. And this is a trend that will only strengthen, unless of course the US will not review its policy. Because as soon as a dollar a brewing financial crisis, the ruble looks increasingly attractive port in the storm. Especially for those countries that are critically short of dollars.

After the Bank of Russia cuts interest rates aggressively in the last four months, the ruble fell. The CB accumulates large amounts of savings, which can be deployed in the form of new business loans and corporate bond issues with a much better pace than even a few months ago.

Investors in the West are looking for a reliable profits and emerging markets don’t need dollars. And while the ruble is far from the overthrow of the dollar on the world stage, will require only a small change in demand to create excessive effects on the markets, is relatively small in comparison with the Russian.

The speed of de-dollarization of the Russian economy is not as high as evidenced by the headlines of the Russian media. On the ruble now accounts for over 30% of Russian exports and 20% of its international trade.

However, on the way Russia is no longer alone. India, Turkey, China, Iran and others know what it means dependence on the dollar during economic downturns. And they are working with Putin to lay the Foundation, to prevent the collapse of their economies, when you go dollars.

That’s why Putin and XI adamant in finding ways to bypass the dollar for trade. Now, when the political reality around Russia is much better than it was four years ago, its stock market is booming. Demand for its debt is increasing, and it is logical that investors are looking towards Russian companies.

And the key to the mass arrival of investors in Russia will be the EU. Russia’s trade with the EU the Euro is almost as big as dollars. Therefore, we cannot exclude that next year the EU will begin to cancel their sanctions are not looking at the United States.